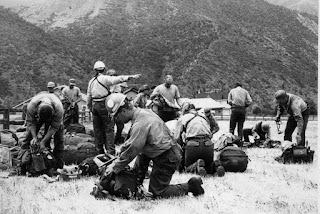 I wrote this a little less than a year ago, as we once again marked the anniversaries of three devastating fires I experienced in the Pikes Peak area. Drought conditions through much of the state and fires already realized on the Western Slope and elsewhere, indicates we might be in for a rough fire summer.  As always, I am grateful for those that answer the call and fight those fires on our behalf.


Thank you for answering the call

Fighting fire is something I am familiar with. My dad fought them all of his life. My younger sister spent years battling them for the United States Forest Service. I mark various watershed events in my own life by the experience of fire.

All the time I was growing up in a small town in southwestern Colorado, a strange, faceless phone with no dialing mechanism hung right on my dad’s side of my parent’s bedroom. I think there might have been as many as eight of them (exactly alike) hanging in various locations (homes and businesses) around the small town of 800 residents.

All of them were the property of the local volunteer fire department.

Whether it be night or day, the loud, unremitting, urgent ring would sound continuously at the breakout of a fire -- until someone picked up and answered the call.

If the call was judged not to be a prank, or false alarm, then the lever on the black box next to the phone was shoved over, all the way to the right, and the fire siren down at the town hall would begin its mournful summons of the 25 or 30 volunteer firefighters in the area.

Later, of course, heavy, boxlike pagers were worn on volunteers’ belts and the siren (that also served as the noon whistle, because it was necessary to test each day), became obsolete. I am not sure what they use today in that town.

The volunteers serving on that department – all by choice – and all continuing to work their regular jobs or at businesses to pay the bills and feed their families, would drop everything when the siren wailed.

I considered that carefully this week, as we continued to evaluate how fortunate we are, and what a debt we owe, regarding firefighter’s response and effectiveness when called to serve. When everyone else is running out, they are unselfishly, and usually anonymously, running in.

I suppose we should be out lining the roads, making signs and remembering to mark the firefighters recent efforts, as well.

Or perhaps Oregon wildland firefighters: Zach Zigich, Retah Shirley, Jacob Martindale, Danial Rama, and Bart Bailey who suffered the same fate, in the van crash near Parachute, as they were coming to help us out during Hayman?

After all, it might be night or day, and they may have to drop what they are doing to hear our urgent ring.

Much like that faceless phone of my youth, we might forget about them for the most part, and never remember their names, or what kind of sacrifices they may have to make. 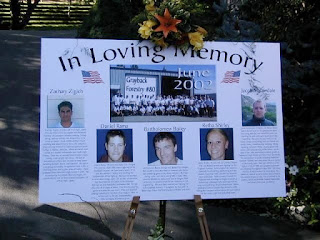 Well put. That is truly an ultimate sacrifice. We need to remember. Forever.
Lynn Gray