Be careful with those bees 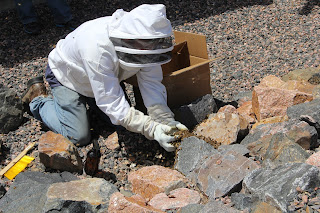 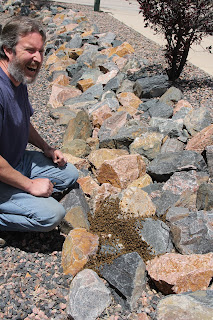 Swarm on the rocks gets moved without incident


It can be somewhat unnerving when swarm of bees show up, flying all around on your front porch. Marianne Roane had that problem last week when the little buzzers started relocating on rocks near her front porch at her townhome in Monument.

Neighbor Bob Jackson helped her out by calling a bee guy to come and take a look.

The bee guy, Ed Buckley of Buckley Homestead Supply, came by that afternoon and moved the swarm into a cardboard box, with the help of Hadley Buckley and a younger Ed Buckley.

“It’s all very natural,” said the older Ed Buckley. “Half of hive stays with the old queen, and half goes with a new one.”

He said it wouldn’t be much of a chore to move them into the box, because as soon as he found the queen, all the rest would follow.

Sure enough. After scooping several hand-fulls into the box, as Buckley said, the bees started to signal “in here, she’s over here.”

The rest followed, and as far as anybody could tell, no one was stung in the process. 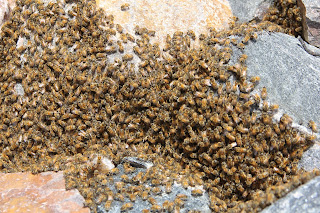