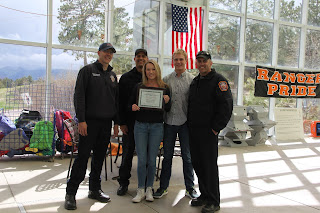 Amanda Sievert, 18, and her friend, Arik Althouse, 17, have worked as guards at Woodmoor Aquatic Center for nearly three years. Sievert is a senior at Palmer Ridge and swims (100-yard breaststroke) for the combined Lewis-Palmer team. Althouse is a junior competing as a diver.

If you were to ask either of them, they would tell you, lifeguarding is about training, and generally fairly routine. One recent Tuesday, during spring break, at the end of March, it took a different twist.

That afternoon, Sievert found herself in the very real position of rescuing her much-larger friend from the water, after a dive went went astray. Though he doesn’t remember much of it, Althouse said he is thankful that his friend was there for him.

“I was attempting a reverse twist, and apparently hit my head on the right side of the board on the way down,” he said. Then, in the water, he clenched into a ball, in seizure. Sievert, guard on duty at the time, took charge of managing the water rescue with help from others, got him out of water, and onto backboard as protocol called for. “It was challenging, and complicated,” she said.

From all accounts, Sievert rose to occasion and performed admirably. In fact, so much so, the professional emergency service staff wanted to recognize her for her deft conduct as a guard.

“By the time we got here, he was perfectly packaged, on the back board, with an SC Collar, neck stabilized. I would call it text book. By the book.”

Sievert was quick to point out help she received that day, including the following:

Jack Nagle- LP diver who was in the water at the time of the accident, grabbed Aric immediately until I got there

“We are very proud of our daughter, and the great training she has had here at Woodmoor, and she was able to help her good friend,” says Amanda’s mother, Jan Sievert, and she says that Amanda will continue to use that training to lifeguard at University of Oklahoma after graduation in few weeks.

Amanda was talking with dive and swim coach Alan Arata at the time of the accident, and both said they knew when beginning the dive was thrown, something had gone wrong.

“It was frightening, but she did everything correctly.” Althouse was transported to the hospital that day, and underwent concussion protocol for week, but is back diving again.

Paramedics Adam Wakefield, Tony Tafoya and Kris Mola responded when Sievert needed to pull her friend, Arik Althouse, from the water after a dive went astray. The paramedics returned last week to commend her for coolness and effectiveness under pressure.

Arik Althouse and Amanda Sievert flank the backboard on which Althouse was transported on.

The diving board at Woodmoor Aquatic Center. 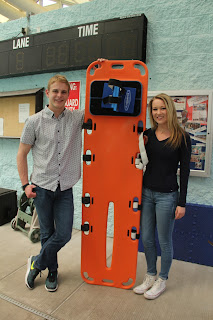 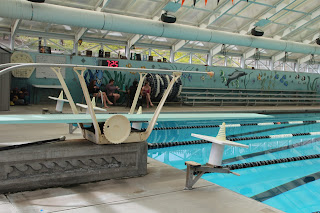