Guess we have a story to tell 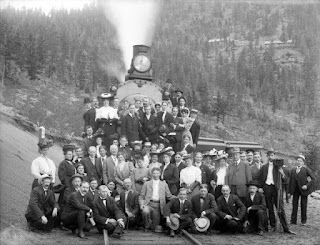 Remarkable coincidence in the search for connections

“What connection can there be, between the place in Lincolnshire, the house in town, the Mercury in powder, and the whereabout of Jo the outlaw with the broom, who had that distant ray of light upon him when he swept the churchyard-step? What connection can there have been between many people in the innumerable histories of this world, who, from opposite sides of great gulfs, have, nevertheless, been very curiously brought together!”

Coincidence is often defined as a remarkable concurrence of events or circumstances without apparent causal connection. I continue to marvel at how it plays a role in my own life.

Years ago, I befriended an old guy in Fairbanks, Alaska, that lived next door to my wife's family. Frank Stewart. As things progress, he found out I was newspaper guy, working at the time with the Courier and Gold Rush in Cripple Creek.

He said his father, Frank Stewart also, was a railroad engineer on the Colorado Midland, based in Colorado City, but after that, he went north to work on the Alaska Railroad.

He told me a story, and showed me a pistol that was taken from would be robber, between Divide and Florissant during a train robbery.

For perhaps 20 years I looked to authenticate that story, in the records of the Cripple Creek Times, Victor Record and other papers that became folded into ones that I became associated with. For years after the first meeting, I provided a subscription of the Cripple Creek Gold Rush, and later the Courier, that Frank (Jr.) said he would be interested in, hoping it might lead something, even another story or anecdote, that folks like us storytellers can hang our hat on.

I have not been able to track it down. Frank, being very young when he heard the stories (it happened before he was born), didn't really have an idea about date. Time marched on. I left the papers in 2007, and did other things for years, though I remained curious about the whole affair over those years.

Then, in 2011, I returned, though I must confess, did not think much of it until visiting Frank in Fairbanks again about three or four years ago. With time and health issues, Frank didn't really remember much about the whole affair. But his wife asked me then to discontinue the sub, that had somehow survived through different papers and ownerships, and asked for possible repositories for the pistol and perhaps other items related. I suggested some. Don't know if they acted on my suggestions.

Time marched on, years passed, and another old story, about trains in West Creek area, caught the interest of Ken Springer, a local guy with common interest in history and trains etc ...

"I'm really into the Cripple Creek and CO railroad history in this area. Lots of info stashed on my HD, and I know where to get more but just can't seem to have the time or finances to get it done," he said. "Maybe we should get together sometime." We met at the Courier a few months ago and among about million other things, the train robbery on the Midland came up.

A few weeks ago, I received the following email from him.

"Hot Damn!!! Here's your train robbery!" And sure enough, in the pages of Leadville paper, The Herald Democrat, Sept. 2, 1910, was the telltale headline.

"ENGINEER SHOT BANDIT, Daring Attempt to Hold Up Midland 3, Near Divide This Morning. One Train Robber Dead," it said.

"As result of an attempted train robbery on the Colorado Midland between Divide and Florissant, one robber is dead, Engineer Stewart is shot in the leg, and unknown hobo dangerously injured," read the lead.

"That's the one," I emailed Springer. " I appreciate you finding it." Looked for that for years, I thought to myself. Then I thought, what did Dickens mean by "Mercury in the powder?"

It's not surprising readers don't understand this, as it requires obscure knowledge of Roman mythology and the way servants were dressed at the time his book was set. Mercury was the messenger God, and footmen and doormen wore powdered wigs. So, "Mercury in powder" just means a servant who is announcing a visitor.

Time still marches on. Coincidence. Connections. Curiosity. Guess we have a story to tell. Certainly it is remarkable.
Photo Information: The Colorado Midland's Maiden Voyage to Cripple Creek in 1900.
Posted by ___ Restless Native at 8:02 AM