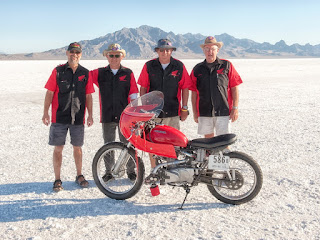 Everyone knows Dr. Frank Puckett of the Monument Vision Clinic, as mild-mannered optometrist and mainstay of the Tri-Lakes area since 1978. But as motor-bike-riding, landspeed-record-holder on the salt flats of Bonneville?
“I started phasing myself out, and stop seeing patients Dec. 31,” Puckett said. But that doesn’t mean he has slowed down. In fact, he and his team is still looking  to set some land-speed records on his motorcycle at Speed Week at Bonneville the last week in August.
They are hoping to set records in as many as four specific classes with four different riders.
“We change the bike slightly, and compete in differents classes,” he said.
Puckett first began riding bikes as a youngster on the family cattle ranch in Montana. Now, he and his team meet every Tuesday, or Wednesday, and sometimes both, in preparation for Speed Week in Bonneville Aug. 26 to 31. “We camp out there all week,” he said. 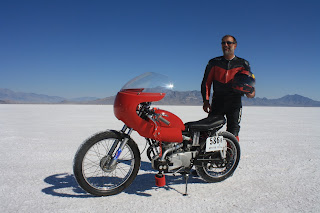 2. Dr. Frank Puckett, on 100cc salt flats racer.  “The one we are building this year is a 1971 Triumph 250cc that will be in the modified, partially streamlined, pushrod, supercharged class,” says Puckett. 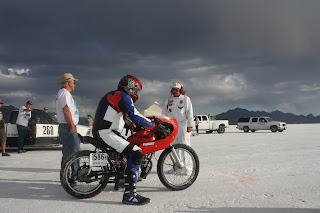 3. Jim LeFebvre at the start line ready to run our Honda 100cc bike down the course, with Dan watching and helping. 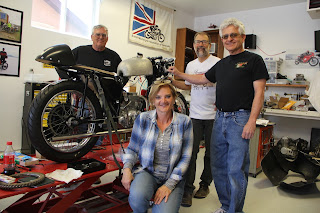 4. Jim LeFebvre, Maria Gerber, Dr. Frank Puckett, and Dan Roberts last Tuesday in the shop working on late summer entry for Bonneville. Lenny Spall, who has 40 years experience in  aircraft mechanics, could not attend that day. 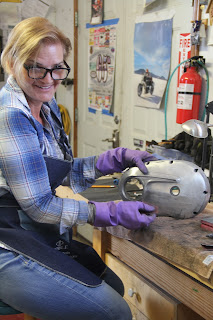 5. Newest member of the crew, Maria Gerber, has only joined the team this year but has been interested since she was a young girl watching her grandfather work on European bikes in his shop in Hungary. Living for years in Alaska, she has built her own modified Jeep and says learning about bikes and speed records were on her “bucket list.” 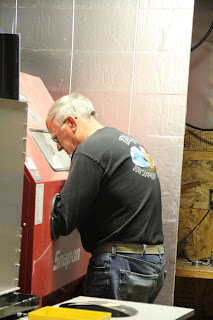 6. Jim LeFebvre, a crew member for three trips to Bonneville already, worked in the defense industry for 40 years with computer code, and first started riding bikes in Panama when he could license there sooner than one to drive an auto. 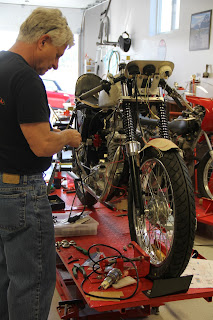 7. Dan Roberts, a retired electrical engineer, remembers his first bike was a Honda 90 cc when he was 16, and when the dogs chasing were able to catch him, he progressively moved to larger and faster models. 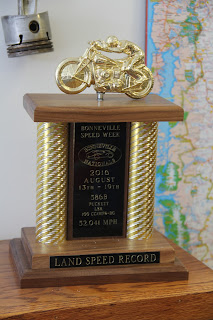 8. Puckett already is already has acquired a land speed record at Bonneville at 2016 speed week. “That’s an expensive trophy,” he says. 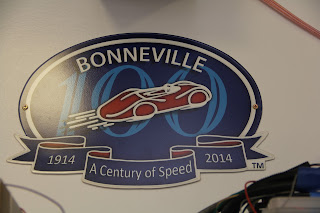 9. The salt flats of Bonneville have been home to speed development for more than 102 years. 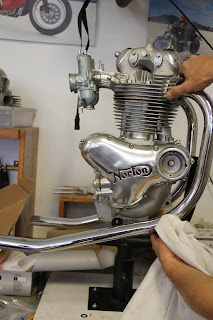 10.  A Norton engine looks almost like a trophy itself but like many British engines were known for vibrating and leaking. 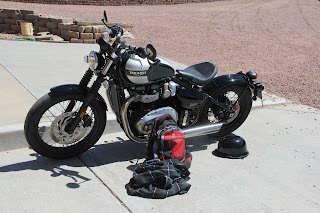 11. A new Triumph, is the ride of choice for Jim LeFebvre, and the team maintains membership in the British Motorcycle Association of Colorado.