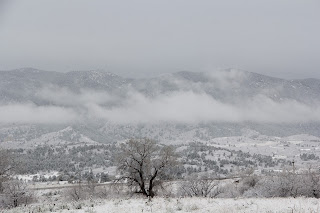 Made it through March

Spring has sprung in the Tri-Lakes area

By Rob Carrigan, rob.carrigan@pikespeaknewspapers.com
In the 1972 Sydney Pollack film “Jeremiah Johnson” about how a war veteran, weary of society, enters the Rocky Mountains around the middle of the 19th century to become a lone mountain man. Civilization eventually catches up with him and he finds himself between all fronts.
The movie features one of the alltime best lines about spring in the area.
After a long time and near the end of the story, Bear Claw (played by Will Geer) and Jeremiah Johnson (played by Robert Redford) meet again in early spring after not seeing each other for a long time.
“March is a green muddy month down below, some folks like it. Farmers mostly,” notes the grizzled old mountain man Bear Claw.
Having recently made it through March, and on into April, folks here in the Tri-Lakes area have earned the right to celebrate the season. Farmers, or not.