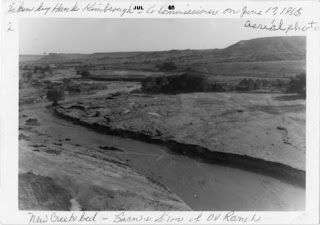 Ben Franklin, an old newspaper man himself, noted that is “It is the first responsibility of every citizen to question authority.”
In the midst of questioning authority, and generally bringing useful information to public,
"Public enlightenment is the forerunner of justice and the foundation of democracy. Ethical journalism strives to ensure the free exchange of information that is accurate, fair and thorough. An ethical journalist acts with integrity," according to the Society of Professional Journalists.
I have always considered it a noble profession with a lot of responsibility.
It can also be dangerous. I was reminded of that recently researching the story about the 1965 floods in this area. One of the first reported deaths during that crisis was James Osnowitz.
"James Osnowitz, 23, a Pueblo Star-Journal and Chieftain employee, died when his car crashed thru  the barricade at the scene of flooding, near Larkspur, south of Denver," said the Chicago Tribune on June 18, 1965.
His obituary in the Colorado Springs Free Press on June 18, 1965 headline read:
"Pueblo Newsman Drowns in Flood Near Larkspur." It goes on to report.
"The body of a 22-year-old Pueblo newsman was pulled from his submerged car near Larkspur, Douglas County, Thursday. James Edward Osnowitz, a summer employee of the Pueblo Chieftain and Star-Journal, was found by skin divers. Because officials of the Douglas County Sheriff's Office could not reach the area, Sheriff Earl L. Sullivan of El Paso County ordered the body brought out. The body was taken to St. Francis Hospital and then to the Law Mortuary pending transfer to Pueblo. Osnowitz was born on Jan. 9, 1943, at Sioux City, Iowa. He was a recent graduate of Southern Colorado State College at Pueblo and held a scholarship to the University of Pennsylvania School of Journalism. The Osnowitz car apparently crashed through a barricade and he was trapped inside by flooding waters Wednesday, according to the report."
The Committee to Protect Journalists identifies 1,134 journalists killed, just since 1994, when it started keeping records. Other ways of making a living, and just living itself, of course can be dangerous.
For example, Jessica Ghawi, an aspiring Colorado sports reporter who barely missed a deadly Toronto shooting a few days before, was among those killed by a crazed gunman at an Aurora theater, just going to movie on her off time.
And the Alan Berg killing, June 18, 1984, was a stark reminder that certain crazy people can take offense from things you might say, and even the way your say it.
Berg was an American attorney and Denver talk show host notable for his largely liberal, outspoken viewpoints and confrontational interview style. Berg was gunned down in the driveway of his Denver town home by members of the Order.
All of us know of more tragic examples that burn uneasy concern in our operating plans. Journalists, and of course everyone's, primary responsibility is to try to stay upright and breathing in the line of duty and danger.
Sam Clemens, or Mark Twain by the name he developed writing for the Virginia City Territorial Enterprise, had perhaps the correct take.
“Do something everyday that you don't want to do; this is the golden rule for acquiring the habit of doing your duty without pain."
To emphasize: Duty without pain.