A battle, unfortunately, way too familiar. 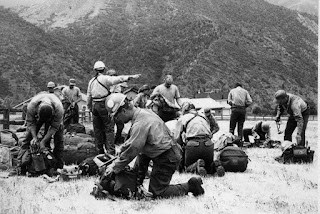 Fighting fire is something I am familiar with. My dad fought them all of his life. My younger sister spent time battling them for the United States Forest Service. I mark various watershed events in my own life by the experience of fire.
"Andrew Zajac was a well-liked and active student at Downers Grove North High School, where he played football, performed cello in the orchestra and signed up for exciting trips abroad with fellow classmates," writes Annemarie Mannion and Gary Gibula of the Chicago Tribune.
"As news spread that Zajac, 26, was one of the three firefighters with the U.S. Forest Service killed this week while battling a fierce wildfire in Washington state, friends, family and former acquaintances in the west suburbs mourned the loss of a local kid who grew up to do heroic work," said the Tribune story last week.
"Zajac and two other firefighters — Tom Zbyszewski, 20, and Richard Wheeler, 31 — were killed and four others injured when what authorities described as a “hellstorm” of flames driven by shifting winds overtook their crew Wednesday after they crashed their vehicle while fighting a wildfire in north-central Washington."
Almost 30,000 firefighters are taking on 100 large fires in drought-stricken, and heat-ravaged Washington, California,  Idaho, Montana, Oregon, and other parts of the West.
The three, took their last firetruck ride along Twisp River Road,  as hundreds in smoke-stained Nomex removed their hard hats to honor the procession for the fallen — before heading back to the fire lines.
I noted, (not for the first time) that there is connection among those battling blazes.
An unlucky 13 firefighters have been killed fighting Western fires this year.
Locally, Divide Fire Protection District, North East Teller County, and perhaps others, each have sent trucks west to fires.
The 13 recalls the South Canyon Fire on Storm King near Glenwood Springs in 1994 unfortunately, and makes me recall the 14 killed there.
Prineville Hotshots: Kathi Beck, Tamera Bickett, Scott Blecha, Levi Brinkley, Douglas Dunbar, Terri Hagen, Bonnie Holtby, Rob Johnson, Jon Kelso.
Missoula Smokejumper: Don Mackey
McCall Smokejumpers: Roger Roth, Jim Thrash.
Helitack: Robert Browning, Jr., Richard Tyler.
Five firefighters died from injuries sustained from a June 21, 2002 traffic accident en route to the Hayman fire in Colorado from Oregon: Zach Zigich, Retah Shirley, Jacob Martindale, Danial Rama, and Bart Bailey. I will never forget the disconsolate, but determined, looks on firefighter's faces when they announced those names at a Lake George fire briefing, then.
It is important to remember — always, I think.

Photo information:
The lone helicopter on the South Canyon Fire on Storm King Mountain, shown here before the blowup on July 6, 1994, shuttled the Prineville Hotshots from Canyon Creek Estates to the fire. Courtesy of Bowman Museum.