Yo Hablo: It is all part of the program 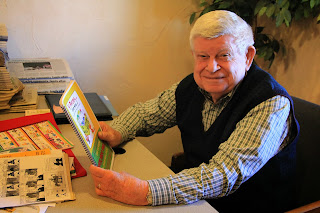 “Honor to the soldier and sailor everywhere, who bravely bears his country's cause. Honor, also, to the citizen who cares for his brother in the field and serves, as he best can, the same cause.”

At 82, Bill Frier knows about honor and service. Twenty years in the Air Force, third in a line of West Point graduates in 1954, flying C-130s, teaching at the Academy here in Colorado Springs — it is all part of the program for him.
And the thing is, he knows about programs, too.
As the one-time Chief of Television for the Air Force, that is to be expected.
One of his proudest moments he will tell you, however, is development of his "Yo Hablo" program teaching conversational Spanish and pioneered in the early days at the Air Force Academy.
"In 1961, B. Gen. Robert McDermott (Dean of Academies, U.S. Air Force Academy and future CEO of USAA) launched a pioneer program teaching conversation Spanish over a newly-installed, close-circuit TV system to over 500 military families on base. He chose me, then an Associate Professor Spanish, to write and present, three times daily, the program — live, as there was no videotape available," says Frier.
"I was given the freedom to present my course my 'fun and easy way,' with cartoons and humor which had proven very effective when teaching the cadets. The pioneer experiment was a grand success."
He duplicated that success again in 1968 when the program was launched on CBS and later Educational Television, the forerunner of PBS, aired the program, and the president of CBS at the time, granted him use of the company's studios to put the production together. Today the course is certified in the Colorado prison system for inmates and employees.
Frier's enthusiasm for Spanish and Spanish speakers began in 1935 when his family moved to Mexico City, according to forward in the "Yo Hablo" book created to supplement the program. He returned to the US when he was 13 speaking Spanish like the natives. He also has a Master's degree in Spanish.
"Pulling from his memory of childhood cartoon characters he drew while growing up in Mexico, and using that musical language which was his second tongue, Bill devised the "Yo Hablo" show. The childish cartoons were revised, humanized, and sophisticated under the subtle hands of friend and artist Bob Dover of Colorado Springs. The artist transformed the ideas of the child into living people. These people populate the view's guide accompanying the series as an integral part of the learning experience."
Bob Dover polished his craft working with the Walt Disney Company.
"I last met with General McDermott approximately eight years ago (he was the CEO of USAA) on his last visit to Colorado Springs. We renewed old memories of the pioneer Spanish course and its successes. He strongly urged me to 'turn Yo Hablo upside down' teaching English to Hispanics — he emphasized the huge need it would fulfill, and with modern technology ... even one program could reach millions of families through the internet — and the central script already exists for 52 lessons.
"I launched in 2008, in the Hispania News, (a free newspaper in Colorado Springs) 'Y Ahora Yo Habo Ingles' one lesson per week," said Frier.
"I put together all of the lessons presented in 2008 and early 2009. Sadly, the editor of Hispania News, Bob Armendariz, died suddenly and Hispania News closed its doors."
Despite the setback, Frier hopes to share the value of his Spanish/English program that potentially could reach millions. He wants to transfer the entire course to the internet and perhaps sell, for a small fee, the cartoon text to fund future endeavors, such as editing the Spanish program "upside down" on to video, and teaching basic conversational English to Hispanics, as General McDermott suggested.
The program, if he is successful or not, is just one more example of a lifetime of honor and service.