The Seven Wonders of Dolores 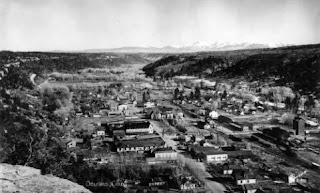 Intend to remedy that by naming a new list

The Seven Wonders of the World has historically been a listing of seven sites known to the Ancient Greeks as the most notable locales in their known world.
The originals: The Colossus of Rhodes, The Great Pyramid of Giza, The Hanging Gardens of Babylon, The Lighthouse of Alexandria, The Mausoleum at Halicarnassus, The Statue of Zeus at Olympia, The Temple of Artemis at Ephesus. All fine attractions.
Over the years, and down through history, others have developed their own lists. The Seven Natural Wonders, developed by Cable News Network in 1990s, The Seven Modern Wonders, developed by the American Society of Civil Engineers, and even the "New" Seven Wonders.
But like most secondary contrivances, the second string is just that.
I intend to remedy that by naming a new list: The Seven Wonders of Dolores, and my selection criteria follows.
7. Rope elevator in the Exon Mercantile building.
Never has an eighteenth-century marvel been so underrated as the the platform rope and pulley system near the back of the Exon Building that drops a 10-foot by 15-foot  section of the very floor out of one building and into the basement below.  Sure, maybe it is dangerous and maybe, Yes, you could fall down an poke your eye out, or perhaps run your fingers through the pulleys (or maybe even squash something like a bug if you dropped it while someone was below) but hours of entertainment offset all the dangers and then some.
6. Painted D on the side of the hill.
Certainly a maintenance nightmare, once again rife with the dangers of actually falling from a sandstone cliff,  and less than environmentally sound, the faded black paint peeking from the tree-line stands as an icon of Doloresdom. Not to mention, the hours beneficially 'wasted,' instead of being in school attending to regular studies.
5. Second staircase in the Taylor Hardware's shop.
I know this is an obscure reference for many, but any that have known of, and witnessed the wondrous flight that drops out of the wooden ceiling to the cement shop floor below, and the pulley and weight system that allows it to do so, then be retracted if nothing occurred, are often awe-struck beyond belief.
4. Plywood raft in Town Pond
Utilitarian in nature, the raft bounced around the edges of the town pond for many years,  serving as a de facto fishing vessel, frogging operation, mud bog vehicle, and upon occasion search and rescue conveyance.
3. The retractable basketball supports on the stage in the High School Gym.
Two bolts removed, and retraction via cable and a hand winch, allowed the complete transformation of a stinking, hardwood-floor, basketball arena, and other athletic endeavors; to a stage and auditorium suitable for graduation, plays, and all school assemblies. No one knows the transformative powers better that the wood-ribbed edifice in the center of Dolores Schools.
2. Fourth Street Bridge.
A personal favorite, long-since removed, the cast iron structure, darkened with the rust of the ages, connected the outside world with the little town in the valley, as a ribbon of highway drops off the ridge and down into the mouth of a Lost Canyon. Fish lined up in the depths of the channels below, and hobos and delinquents camouflaged in the red willows and Cottonwoods nearby.  But as Neil Young noted "Rust never sleeps."
1. Big Rock between 7th and 8th Street.
Never in the course of human events in such a small town, have so many, owed so much to a single rock in the middle of the Dolores River. Entire languages have been developed and learned in the shadow of that stone. Working on mysteries without any clues, working and practicing... Perhaps my entire lyrical base (as well as Bob Segar's)  owes such a debt. "Like a rock, I was strong as I could be. Like a rock, nothin' ever got to me. Like a rock, I was something to see. Like a rock."
I wonder — if there are other such wonders.

I will never forget the fourth street bridge. My truck did not fair to well when I ran off it in 1980.

The Hollywood was an arson fire with an extremely flammable, hot accelerant. With all the additions, false ceilings, etc., the fire was beyond anyone's control. We pride ourselves on one of the best volunteer departments in the state. There may have been visiting firefighters in town, but they didn't have equipment. Please don't judge our firemen until you have been in their shoes. They gave it their all and more!