Regular guy, janitor at the Academy, and Medal of Honor winner 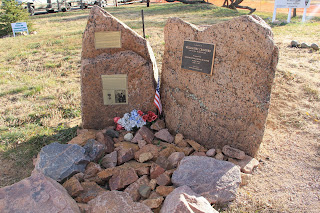 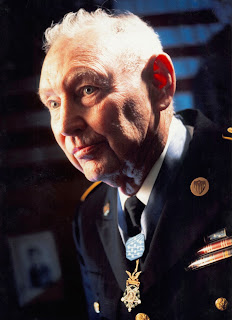 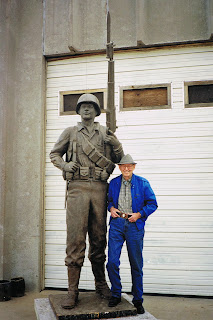 Bill Crawford seemed like a regular guy.
He grew up in Pueblo, served in the Army until his retirement as a master sergeant in 1967.  After retirement, his life was fairly unremarkable, getting a janitor job, serving as director of the Lucretia Vaile Museum.  In fact, as a janitor at the Air Force Academy, he didn't really stand out. Went to work, took care of his custodial details, returned home to Palmer Lake in the evening.

"As a janitor William “Bill” Crawford certainly was an unimpressive figure, one you could easily overlook during a hectic day at the U.S. Air Force Academy. Mr. Crawford, as most of us referred to him back in the late 1970s, was our squadron janitor," he wrote later.

"Maybe it was Mr. Crawford’s personality that rendered him almost invisible to the young people around him. Bill was shy, almost painfully so. He seldom spoke to a cadet unless they addressed him first, and that didn’t happen very often. Our janitor always buried himself in his work, moving about with stooped shoulders, a quiet gait, and an averted gaze. If he noticed the hustle and bustle of cadet life around him, it was hard to tell. So, for whatever reason, Bill blended into the woodwork and became just another fixture around the squadron. The Academy, one of our nation’s premier leadership laboratories, kept us busy from dawn till dusk. And Mr. Crawford...well, he was just a janitor," wrote Moschgat.

"That changed one fall Saturday afternoon in 1976. I was reading a book about World War II and the tough Allied ground campaign in Italy, when I stumbled across an incredible story. On September 13, 1943, a Private William Crawford from Colorado, assigned to the 36th Infantry Division, had been involved in some bloody fighting on Hill 424 near Altavilla, Italy. The words on the page leapt out at me," said Moschgat

The citation he stumbled upon read as follows:
"For conspicuous gallantry and intrepidity at risk of life above and beyond the call of duty in action with the enemy near Altavilla, Italy, 13 September 1943. When Company I attacked an enemy-held position on Hill 424, the 3d Platoon, in which Pvt. Crawford was a squad scout, attacked as base platoon for the company. After reaching the crest of the hill, the platoon was pinned down by intense enemy machinegun and small-arms fire. Locating 1 of these guns, which was dug in on a terrace on his immediate front, Pvt. Crawford, without orders and on his own initiative, moved over the hill under enemy fire to a point within a few yards of the gun emplacement and single-handedly destroyed the machinegun and killed 3 of the crew with a hand grenade, thus enabling his platoon to continue its advance. When the platoon, after reaching the crest, was once more delayed by enemy fire, Pvt. Crawford again, in the face of intense fire, advanced directly to the front midway between 2 hostile machinegun nests located on a higher terrace and emplaced in a small ravine. Moving first to the left, with a hand grenade he destroyed 1 gun emplacement and killed the crew; he then worked his way, under continuous fire, to the other and with 1 grenade and the use of his rifle, killed 1 enemy and forced the remainder to flee. Seizing the enemy machinegun, he fired on the withdrawing Germans and facilitated his company's advance."


Bill Crawford, the janitor, was a Medal of Honor winner.
Though, because Crawford was captured by the Germans and presumed dead in the battle following, in 1944 the Medal of Honor was presented posthumously to his father. Later in the year, Crawford was among a group of soldiers rescued from German captivity. He had not been presented the medal himself, as was the custom for living recipients.

Years later, in 1984, the commencement speaker at the Academy was the President of the United States, President Ronald Reagan. Looking over the sea of young faces that represented the very best our Nation has to offer, he said: "America's men and women of today have made us a great Nation." And then the President turned his attention to the past, calling forward a 66-year old janitor crisply dressed in a uniform that still fit his trim frame. Forty years after his heroism at Altavilla, Italy and 17 years after his retirement from a military career, the President hung the Medal of Honor around the janitor's neck.

The cadets themselves, had decided proper recognition of their janitor was long overdue, and had taken steps to see an "oversight" corrected.

Crawford died at his home in Palmer Lake on March 15, 2000.  He is one of four Medal of Honor recipients from Pueblo, Colo.