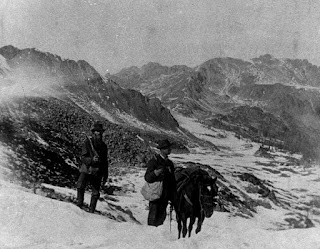 In the rush to the Rockies in 1859, the call of “Pikes Peak or bust,” may have had more to do with finding the most obvious landmark than any concentration of gold in this area. It may also have had more to do with opportunistic newspaper accounts than any strong show of color in area streams.
Following on the reported success of the Russell party in what is now Denver, another group of gold seekers, known as the Lawrence Company, reached Pikes Peak in search of gold in the summer of 1858. They soon moved north to the banks of Cherry Creek near present-day Denver. Both groups may have in fact owed their origins to tough times in the Missouri and Mississippi Valleys, as a result of the panic of 1857.
When they found gold there in July, exaggerated reports traveled like wildfire in the Weekly Kansas Herald, the Mississippi Republican and the St. Joseph Gazette.
“Eastern Kansas – especially Leavenworth – is largely represented here,” wrote a correspondent for the Lawrence Republican in June of 1860. “It is difficult in business hours to walk half a square in Denver without meeting some familiar face in your section.”
“The Pikes Peak gold rush was a misnomer, since the early gold seekers traveled to the mouth of Cherry Creek in present-day Denver, and even later moves into the mountains were in areas other than around Pikes Peak,” notes Kansas historian (though he is a native of Colorado) Calvin Gower.
“For Pike’s Peak Ho!, screamed the advertisements for the Pike’s Peak Express Company in the St. Joseph Gazette in 1860, and claimed through mail to Denver City in six and a half days.
According to the Leavenworth Weekly Herald, March 31, 1860, “Many of our prominent and best citizens are preparing homes in the land of gold … Leavenworth has already supplied much of the talent and enterprise, as well as the bone and sinew, of the embryo Mountain State.”
By the peak of the rush, all manners of conveyance were being used to transport would-be miners to gold fields in Colorado, including prairie schooners, hand-pushed wheelbarrows, hand carts, horseback, and men on foot carrying black carpet bags.
Approximately 20 guide books to Pikes Peak appeared from 1858 to 1860, according to Calvin Gower. Over half of them were written by men from Kansas. 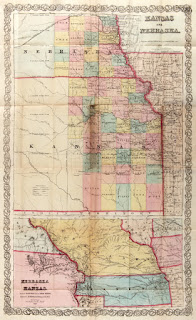 “Most of the books were written by men who had no personal knowledge of the purported mines, but were newspapermen, surveyors, travelers, etc… who assumed to speak with authority on the nature of the country and the mines and trails of the far West and equipment and supplies needed for successful travel across the plains. Some of the guidebooks were issued further in interest of certain outfitting towns and to win adherence to particular routes to the gold region,” wrote LeRoy Hafen, an authority on Gold Rush guidebooks in the 1940s.
###
Posted by ___ Restless Native at 7:41 PM