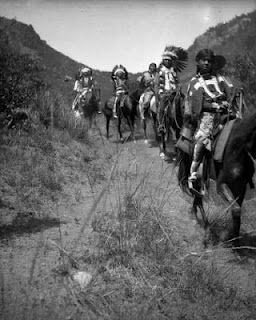 The Utes may have first appeared as early as 2,000 years ago. They were definitely in this state and other mountain areas of the southern Rocky Mountains by 1500 A.D. Regardless of the time frame; either date makes them the longest continuous residents of Colorado.
The word Ute means “high land” or “land of the sun.” The Utes were also known as the “Big Sky People,” or tribe of “the shining mountains” among other Native Americans. According to tribal folklore, there were seven splinters of the tribe known as Ute. They ranged across much of the Colorado Plateau in the Mountains and the desert. Their hunting grounds extended up into Wyoming, south almost to Santa Fe, east into Kansas, and west almost as far as Nevada.
Four northern bands included the Uncompahgre (or Tabegauche), Parianucs (or Grand River), White River and Uintah. In the south, were the Mouche, Capote and the Weeminuche.
Today, Utes live on three reservations. The Northern Utes live on the Uintah-Ouray Reservation near Fort Duchesne in northeastern Utah. The Southern Utes occupy a reservation near Ignacio in southwestern Colorado. And the Ute Mountain Utes are located on a reservation near Towaoc which reaches over into New Mexico and Utah.
Tension and conflicts between the Utes and settlers trying to move into this area have occurred almost from the start of that settlement push. On Christmas Day in 1854, a band of Utes killed 15 inhabitants of Fort Pueblo. It was not recorded how many Utes were killed in that battle.
In another infamous incident, Nathan C. Meeker, and Indian agent on White River and several employees were killed in 1879. More than half the 160 troops under Major Thomas Thornburg were slain in a subsequent battle.
In September 1879, the Meeker incident and the Thornburg Battle, the governor of Colorado campaigned actively to limit the tribe’s freedom calling them “the Ute Menace,” and by 1881, the White River Utes were forced to leave for Uintah Valley Reservation in Utah. Other Northern Utes had been confined there since 1869 after the Walker War and other frays between Northern Utes and Mormon settlers. The Uncompahgre Utes joined them a year later on the adjoining Ouray Reservation.
By 1888, three years before Bob Womack’s discoveries in the Cripple Creek district, most of the fighting between Utes and aggressive settlers was done.
A band of Utes from Utah under Colorow made the last Indian raid into Colorado. The group was defeated and returned to the reservation in Utah.
Ute Pass was an ancient trail, first used by – and then named for the tribe that first traveled these hills as the “Blue Sky People.”