More than 1,200,000 men already have graduated from the "University of the Woods." 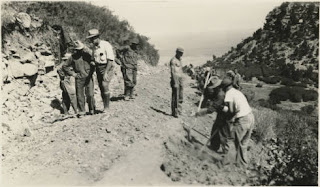 CCC enrollees give themselves heart and soul

to the welfare of the Nation


The State of Colorado experienced a 'late spring' in 1933, with the deepest snow in the winter falling in May, but that didn't set back the formation and organization of a 'Forest Army' in woods of Colorado by the end of the year.

Major General Frank Parker, U.S. Army, the Commanding General 8th Corps Area, at Fort Sam Houston, Texas, described the announcement to commanding officers of Regular Army posts under his jurisdiction that the President had delegated to the War Department the duty of enrolling, clothing, feeding, quartering, transporting to work camps, furnishing medical service for, paying, keeping records of, and responsibility for the control and welfare of some 275,000 young Americans. Units for administration were to consist of approximately 200 men, and were to be called companies.

These men were not to be under military discipline, as are soldiers, would be subject to civil law only. The name of the new organization was to be the Civilian Conservation Corps.

Col. Sherwood A. Cheney, commanding the 2nd Regiment of Engineers and Post of Fort Logan, was one of the post commanders notified. He was directed to help organize and administer the Civilian Conservation Corps in Colorado. Thirty-five CCC companies began forming in the summer of 1933 and were located in the National Forest and Parks of Colorado. The intention was to compose nearly 50 percent of camps of Colorado men, with the remaining being enrollees from Oklahoma and Texas.

Clothing, tents, blankets, cots, cooking utensils, mess equipment, food and medical supplies were gathered for 7,000 men that were transported to the camps. Some of the camps were 85 miles from the nearest railroad and many of the camps were 400 miles from Fort Logan's command structure. That structure was small at the time, made up of 16, or so, officers, and 480 enlisted men.

The CCC groups were often 200 men in each camp, and spread out all over Colorado. Officers and enlisted men converted from duties that had earned them a strong, capable reputation in WW I as an expeditionary forces in France in 1917 and 1918, and tasked with running the CCC camps.

"The best non-commissioned officers and specialists of the Regiment were selected to act as first sergeants, cooks, and company clerks for the new CCC companies," reported military publications. Much of the clerical work of camps were performed by Fort Logan regulars. Additional officers were sent to help from Fort Warren in Wyoming, and For Sill, in Oklahoma, to help administer the Fort Logan Reconditioning Camp, until the CCC contingents could break off into the work camps.

Nearly 900 men from Denver and surrounding counties were fed, clothed, and quartered while awaiting weather conditions to move to the forests and parks, to new camps at 7,500 to 10,000 feet altitudes.

"The unusually heavy snows during May, 1933, prevented a May 1 occupation. By the middle of the month, occupation of camps began."

"With the exception of the medical service in the work camps, the District was organized, and was administered and supplied until the fall of 1933 by Regular Army personnel," according to History of The CCC in Colorado, produced by camp enrollees in 1936.

"By December 1, 1933, the great majority of Regular Army personnel had been relieved from companies, and had returned to their normal duties. Thereafter, companies and work camps were administered by reserve officers, with enrollee assistants."

"Slightly more than three years ago the Federal Government, in its desire to relieve hardship resulting from unusual economic conditions and conserve the natural resources of the Country, authorized the organization of the Civilian Conservation Corps. The undertaking of this giant task was made the duty of several government agencies, the principal ones being the Department of Agriculture, Interior, Labor and War," wrote Major General Frank Parker,  in a letter to outlining the accomplishments in July 27, 1936.

"From the very inception of the movement, there were many people who were somewhat skeptical as what could be accomplished by the Civilian Conservation Corps. From my personal observation, I know that the results which have been accomplished cannot possibly be over-estimated.These phenomenal results were due to some extent to the coordination and cooperation of the participating Federal departments. However, the credit for the success of the movement must be shared by the enrollees that make up the Corps. The determination with which the enrollees set about to perform the tasks assigned them is indicative of the spirit of young American manhood. It shows that they not only realize and appreciate the fact that the Civilian Conservation Corps affords them an opportunity to assist their families and themselves in a financial way, but gives to the Country, as a whole, lasting benefits," Parker noted.

"Since the beginning of the movement in April, 1933, more than 1,200,000 men already have graduated from the "University of the Woods." Not only have these men derived great benefit in the way of physical development through outdoor life and healthy living: but they have been afforded opportunities for improving themselves for return to normal walks of life, and make themselves better citizens," he said.

"It has been my experience that the members of Civilian Conservation Corps have accepted every responsibility thrust upon them, and have accomplished all their duties, in general, in a signal manner. Not only this, but they have been eager to take advantage of the educational opportunities in the camps which the government has so generously provide. All this shows clearly and unmistakably that the American youth has lost none of the strength and virility of his forbears, and that the members of the Civilian Conservation Corps can always be relied upon to give themselves heart and soul to the welfare of the Nation," General Parker recalled.

Photo 2:
Clothing, tents, blankets, cots, cooking utensils, mess equipment, food and medical supplies were gathered for 7,000 men that were transported to the camps. 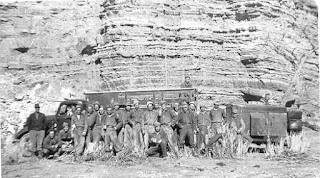