Under an Elm tree from Massachusetts 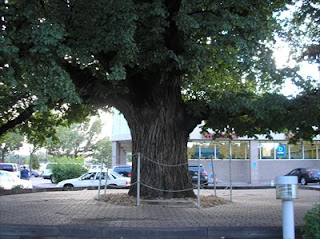 “All our wisdom is stored in the trees.”
― Santosh Kalwar

going back to the Father of our Country

The stories have been around for at least two centuries now...
Here in Loveland, for almost a hundred years we have staked our own claims of arborific celebrity and renown.
Beginning as early as the 1830s, legend has it that the Father of our country, George Washington, first took command of the American Army on July 3, 1775, supposedly reported in the words of Henry Wadsworth Longfellow, under an Elm tree in Cambridge, Mass.
At 205 E Eisenhower Blvd. in Loveland, The Washington Elm Tree in the Walgreen's parking lot between Lincoln and Cleveland avenues, a sickly sprout of the tree first arrived in Loveland in 1932. Root shoots from the original Cambridge tree were sent to DAR chapters throughout the nation, including Loveland's Namaqua Chapter, and the tree was planted in the yard of what was then the Lincoln School. The tree is one of the few Washington Elm offshoots still thriving in the nation, but another DAR member is working to carry on the tree's heritage. Corrine Yahn, who teaches geology at Front Range Community College, works with Front Range laboratory coordinator Susan Brown on micropropagation. For about a year, Yahn says they've been using samples from the Loveland elm to essentially try and clone the tree.
For the original Cambridge tree, publication of the fictional "eye-witness" journal The Diary of Dorothy Dudley in 1876, furthered the legend and although George Washington did take command of the army on July 3, 1775, there is no official documentation stating that this event took place under the tree.
In 1923, the Cambridge Elm tree was very fragile and diseased. Workers from the parks department of Cambridge were cutting two of the remaining limbs. Upon cutting the second limb, the entire tree fell over onto its iron fence and brought the Boston Elevated Railway cable to within 15 feet of the ground. The tree was divided up into approximately 1000 pieces, and these were distributed to all states and their legislatures. The cross-section of the tree was sent to Mount Vernon. About 150 pieces were given to locals in Cambridge, a few hundred were mailed throughout the country, and some fraternal organizations received pieces as well.
In 1925, the legend was openly discredited at the Cambridge Historical Society (CHS), when Samuel F. Batchelder read a paper he later reprinted as The Washington Elm Tradition: "Under This Tree Washington First Took Command of the American Army" Is It True? Batchelder asserted forgeries occurred in the stories told about Washington and the tree.
Today, a plaque embedded in the pavement of Garden Street (at its Mason St. intersection) in Cambridge marks where the tree used to stand. The Cambridge Historical Commission (CHC) has called the association of Washington and the elm a "myth" but stated that "the image of the tree remains a symbol of patriotism in Cambridge.
According to Loveland historian Zethyl Gates, in an August, 1983 article for the Loveland Daily Reporter-Herald, a Loveland woman, Mrs. William Ward was regent of Namaqua D.A.R. Chapter and chair of the National Conservation Committee at the time, and through her efforts, a sprout of Cambridge tree was sent here to Loveland. "Only two other descendants of the original Washington Elm are in Colorado —one in Washington Park in Denver, and the other in Monument Valley Park in Colorado Springs."
"The Loveland D.A.R. received the elm sprout with much misgivings," wrote Gates.
"It was such a sickly looking sprout, barely as thick as a person's finger and only 15 inches long. Twice, it died down after being planted in the school grounds, only to have leaves reappear each time and finally show growth. The janitors of the old school took extra care of the sapling, and it thrived in spite of rough treatment from many scool children playing around it. Pranksters reach as high as they could to tie knots into the ends of the pliable young branches, or to braid several boughs together; young Tarzans would swing from its more than sturdy branches and still the tree grew."
In 1948, the Namaqua Chapter place a marker in a public ceremony and more than 300 local children took part. Later, the 58-year-old school was declared unsafe and then, demolished. Plans for a grocery store were announced and plans for removal of the tree, at the hands of progress were outlined but a community backlash "Saved the Tree."
"At a City Council meeting in March of 1966, three recommendations for preservation of the Washington elm in Loveland were voiced by City Councilwoman Lucile Erwin on behalf of the citizen's committee, and they were approved by council action... So the tree was saved.
"Albertson's is gone; so is the Sears store which occupied the site briefly. Yet the beautiful Elm tree remains, approximately 90 feet tall, with the typical urn shape for which these trees are noted. Perhaps we could say of Loveland's Washington Elm as we say of some people, suggests Gates.
"The rugged individualist grown strong through hardships can no longer be swayed by passing winds. His battered but firm frame and weather-beaten mein have a dignity that commands our admiration and respect." 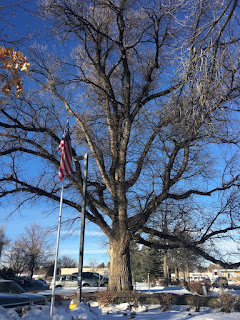 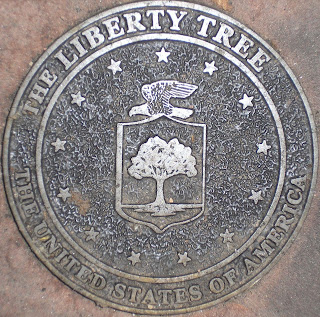 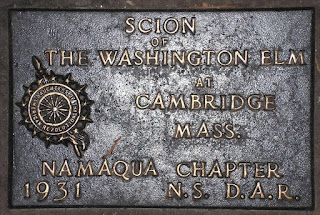