Amid the ghosts of memory's host 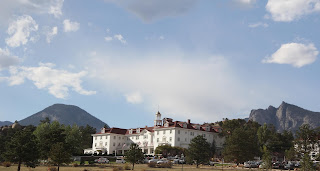 Stories are told of Flora Jane Record Tiletson, who became Mrs. Frelan Oscar Stanley, playing piano in lobby, or the music room, of the Stanley Hotel in Estes Park, long after her death.
"Flora almost predicts her appearances, the most documented of all the ghosts stories at the Stanley Hotel. At last her heavy "mortal coil" has been shed, and she can wander the halls and rooms of her beautiful Stanley Hotel, no longer encumbered by debilitating blindness of her later years, (She may also have suffered from what we call today manic depression or bi-polar disorder,)" writes Susan S. Davis of the Stanley Museum in "Stanley Ghost Stories."

Before her death, in an untitled poem, Flora J Stanley wrote:

The ghostly rap
And knock and tap
Of branches an wind and rain
Call answering ghosts
From memory's host
I strive to stay in vain.

Above the grief
Of wind and leaf
Drips down the sweet refrain.

So amid the ghosts
Of Memory's hosts
A living hope apear'd
And from her throat
A silv'ry note
Falls with the falling tears.

Oft in th dark
The firefly's spark
Will cheer the traveler's way
And amid the rain
Thy sweet refrain
Sends music through the day. 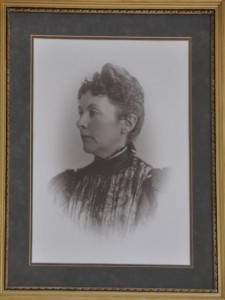 Visions of her at the piano, and elsewhere in the hotel, are characterized by her high white, lace collar, sometimes as younger woman, sometimes aged.
"The Stanley Hotel has no dark history. No one has been murdered there, and the few deaths recorded have been of natural causes. All first-person reports of guest and staff and their time at the Stanley and in Estes Park long-past have been fond memories," writes Davis. 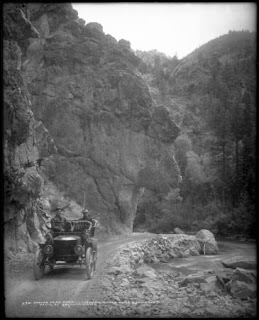 But there is Stephen King and the Shining.

According to King, himself, the novel was inspired by a night at the Stanley, in 1974. Inspired in part by a claw foot tub in room 217, and said it even scared him as he was rewriting it.
"The worst one was the tub thing in the Shining ... it wasn't too bad when I wrote it; all at once it was just there ... But on rewrite, as I got closer to that point, I would say to myself, eight days to the tub, and then six days to the tub. And one day it was the tub today. When I went down to the typewriter that day, I felt frightened and my heart was beating too fast and I felt the way you do when you have to make a big presentation, or something's going to happen. And I was scared. I did the best job I could with it, but I was glad when it was over," King wrote in 2000.
Despite the inspiration, he however notes, his own stay at the Stanley was a pleasant one.
Other ghosts are often reported, over the years, and photography oddly enough has been tricky.
"Twin brothers Francis and Freelan Stanley built the legendary Stanley Steamer automobile.
They built their first steam-powered car in 1897 and sold more than 200 by 1899, making them the most successful U.S. automaker at the time," according to Tony Borroz, of "Wired."
"They sold the design to Locomobile in 1899 and, three years later, founded the Stanley Motor Carriage Co. The earliest models had wood bodies on steel frames with a kerosene (later, gasoline) boiler mounted under the seat. The boiler provided steam that ran a steam engine, somewhat like a mini-locomotive on tires," Borroz wrote.
"The cars were quick. A Stanley Rocket driven by Fred Marriott achieved 127.7 mph in 1906 to set the land speed record for a steam-powered car. Before speed, the brothers were into photography. Francis Stanley invented a photographic dry-plate process in 1883, and the brothers founded Stanley Dry Plate to manufacture them." 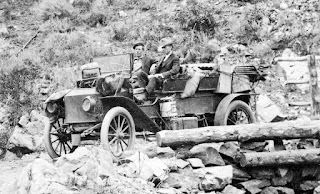 
2. Flora Stanley, from a photo in the hotel.

4. Using the same engine that set the land speed record at 127 MPH in 1906, that is a 1909 Stanley Model Z.  9 passenger, 30 HP Mountain Wagon.  Developed in 1908 for hauling passengers from Colorado Springs, and Fort Collins; up to the Stanley Hotel in Estes Park, Colorado.  Because of its hill climbing ability, several transportation companies in the Rocky Mountain area quickly came into being while using the new Model Z Stanley Mountain Wagon.  By 1912, the Stanley Mountain Wagon had become a 12 Passenger Mt. Wagon.  The last year for the Mt. Wagon being built was 1917.
Posted by ___ Restless Native at 8:28 PM