Auntie Stone and comfort on the Cache La Poudre 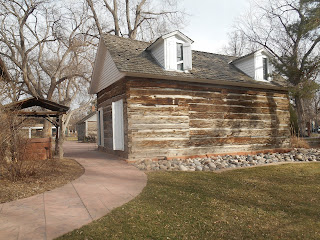 We have come a long way, baby

To steal a line from a Loretta Lynn album and old cigarette commercials, "We have come a long way, baby." I wonder what Auntie Stone would have to say?
The average price of homes sold in the Fort Collins, Timnath, Wellington area of Northern Colorado in 2017 was $397,067, according to local real estate experts.
In the early days at Camp Collins, Elizabeth "Auntie" Stone was one of the most beloved figures in the community's history, and a celebrated cook, hostess, and social center of the military camp's life.
The log house, originally built in 1864 near what became Linden and Jefferson Streets, is still in tact in the Heritage Courtyard at 215 Mason Street, where it was finally moved in 1959.
Stone was variously described as the "Belle of the Ball" and attended parties and danced until she was eighty-six.
"Sometimes, she outlasted much younger folks. Widowed at fifty-one, with eight children to support, she married Lewis Stone a few years later and came West, first to Minnesota, then to Denver. She was sixty-three when she came with her husband to Fort Collins to run the boardinghouse for officers at the fort," writes local historian Barbara Allbrandt Flemming in the 1980s.
"Lewis Stone died in 1866, but Elizabeth, undaunted, took part in several successful business ventures while campaigning vigorously against liquor, enjoying parties, and even going camping and fishing at Chambers Lake at the age of seventy-five. In her nineties and in a wheelchair, she cast her first vote," said Flemming.
Edith Bair recalled in oral histories, that when Auntie Stone died in 1895, the firehouse bell tolled 94 times.
After the Camp was closed in 1867, Stone's cabin was moved around in the area several times, and served various purposes.
But Elizabeth "Auntie" Stone will forever be known for the comfort and society she brought to her home and the early outpost.
As relayed in her niece Elizabeth Keay's 1866 diary entry:
"Arrived in Collins last night, found Auntie Stone well, she had a very comfortable home in this country ...  my private room has an ingrain carpet, nice bed, window with sunset view, with hills and the pretty Cache La Poudre." 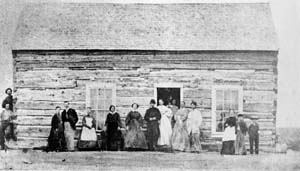 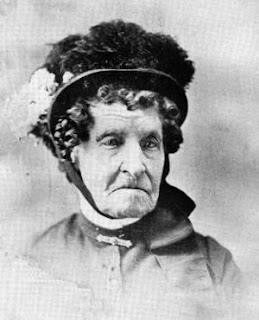