Danger at the center of the universe 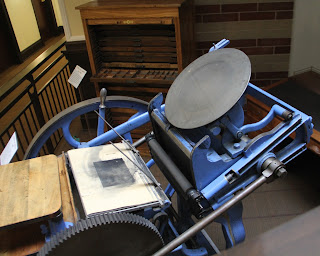 Yesterday, I was over in Greeley and took the opportunity of time travel, visiting some of my Colorado newspaper roots at Utopia's Newspaper.

"Nathan Cook Meeker, agricultural editor at the New York Tribune, penned an editorial proposing the establishment of a new settlement based on morality and temperance in Colorado Territory," reads a display in the Greeley Museum downtown.

"Union Colony was incorporated in 1869. As the population grew, Meeker quickly saw the need for a local newspaper. With a loan from Horace Greeley, 'The Greeley Tribune' was established and began publication on November 16, 1870.

Later, returning to my office in Fort Collins, I somehow found myself engaged in a Second Amendment argument with a longtime newspaper fellow, and was reminded of J.M. Barrie's 1896 assessment that "The Printing Press is either the greatest blessing or the greatest curse in modern times, one sometimes forgets which."

Now, of course, there are other technical methods and mechanisms, but the distributive sentiment holds.

The museum display takes note of Nathan Meeker's steadfast dedication to his particular causes in the opinion wars of the time. "We shall improve, not apologize," reads one pertinent headline.

"Early issues focused on farming, prohibition, and Horace Greeley's political aspirations. Meeker had lofty political ambitions both for the colony and the weekly newspaper he published,"the display says.

"Individuals may rise or fall — may live or die — property may be lost or gained, but the colony as a whole will prosper and the spot on which we labor, shall as long as the world stands, be the center of intelligence and activity."

I think that Meeker's editorial is revealing of newspaper editors in general, and the human tendency for writers, and most anyone spouting off, to opine on ways of the world.

Smartest one in the room. No one else really knows what is going on. All others are blind.

In 1878, Nathan Meeker was appointed U.S. Agent at the White River Indian Agency in western Colorado. The next year, he was killed by Ute warriors in what became known as the Meeker Massacre, during the White River War. His wife and adult daughter were taken captive for about three weeks. In 1880, the United States Congress passed punitive legislation to remove the Ute from Colorado to Uintah and Ouray Indian Reservation in present-day Utah, and take away some land formerly guaranteed them.

According to the Aspen History Society, “Colorow was one of several leaders of a small, unsophisticated splinter group of Utes in Northwestern Colorado, called the White River Band.

In the spring of 1879, Colorow's followers were pressured by local Indian agent, Nathan Cook Meeker, to plant a field of garden crops in a field they had traditionally used to graze their horses.”
Meeker’s miscalculation made members of the band mad.

“In anger, one of the Utes confronted Meeker and ultimately threw him to the ground. Meeker overreacted and sent telegrams to Gov. Pitkin, 200 miles away in Denver, requesting troops be sent for his protection. The army, lulled by general peace on the frontier, and anxious to give its men some "field experience," sent two companies of cavalry and one mounted infantry, (about 200 men) from Wyoming's Fort Rawlins with specific instructions that the Utes not be molested,” says material from Aspen History Society.

“The Utes, however, clearly remembering the massacre at Sand Creek 15 years earlier, panicked. Many moved to new camps or fled the area. But, in the ensuing confusion, a shot was fired beginning events, which would end in the grizzly death of Meeker and all other agency employees. In addition, 2 women, including Meeker's wife, and 2 children were abducted by the Utes.

Colorow explained at the investigation into these events that the stake driven through Meeker's mouth had been necessary.
"To stop his infernal lying on his way to the spirit world.”

The lesson, I guess, is in the danger in thinking that you are the center of intelligence, when every one else thinks the same thing. 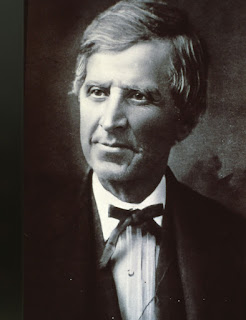