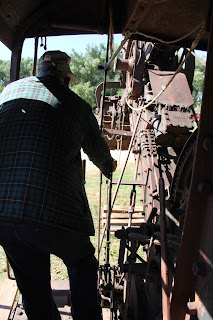 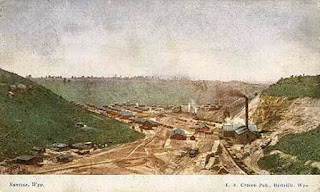 Photo 2 information:
Sunrise, Wyoming, in its heyday during 1930s. Courtesy photo.
__ Story by Rob Carrigan, robcarrigan1@gmail.com
Acting as the fireman on the old, orange-rust-colored Osgood Steam shovel during the recent Reynolds Ranch Restoration Day at the Western Museum of Mining and Industry, I was reminded of a time many years ago, when I first visited the town of Sunrise, Wyo.

Orange houses, orange buildings, even orange trees . . . Sunrise was aptly named, looking like the picture of an orange fireball sun.

Colorado Fuel and Iron hoped to make Sunrise a model company town back in 1904, when it bought the entire Sunrise Mine from Charles A. Guernsey, namesake of nearby town Guernsey, Wyo. Guernsey founded the Wyoming Railway and Iron Company in 1898.

I was the editor of Guernsey Gazette and Lingle Guide for a time in the mid-1980s in Lingle and Guernsey, Wyo. The two tiny papers covered those towns in eastern Wyoming, and several other nearby towns including Fort Laramie, Hartsville and Sunrise.

In the 1880s, the area around what would become Sunrise, was an important area in the mining of copper. Colorado Fuel and Iron, in the early 1900s, built company-owned houses, boarding houses, depots, a school, churches, shops, and other structures.

In response to the Ludlow Massacre here in southern Colorado, further improvements came to the town in the 1910s and ’20s in the form of better brick housing, a YMCA building, parks, a playground, better utility systems, a hospital, and other improvements. By 1928, the mine employed 547.

Sunrise properties were initially strip mined, and then mined using a glory-hole method. In 1930, underground block-caving mining was started, and by World War II all mining was underground.

Ore mined was partially processed on site and then sent to Colorado Fuel and Iron mills in Pueblo.

Because of decreasing ore quality and problems in the domestic steel market, the town and mine were closed by C.F. & I. in 1980.

Over the lifetime of the mine, 40 million tons of iron ore were produced, more than any other C.F. & I. mine. The district was added to the National Register of Historic Places in 2005.

As a kid, working in a hardware store in Dolores, Colo., I unloaded countless C.F. & I. trucks of smooth box nails, bailing wire and rolled fencing that probably utilized hematite mined from that very same Sunrise mine.

But back to the Osgood Shovel (originally steam, now running on compressed air) at the Museum on North Gate Boulevard.

Jeff Tapparo, on WMMI’s board of directors, and also at the shovel's controls from time to time, convinced me I should give it a try.

The shovel is one of the museum’s most popular attractions. Shovels like the Osgood have been tasked at building the Panama Canal, unearthing gold in mining districts of the Yukon – and in the case of this particular shovel, digging glory holes in Sunrise.

The C.F. & I. letters can still be seen on its side panels, if you look hard enough.

During the Reynolds Ranch Restoration Day, officials gave us clues about upcoming projects like eventually getting a mine hoist and headframe operating again.

They paraded antique cars, tractors and Caterpillars and showed us demonstrations in the large and detailed blacksmith shop at the back of the property.

They provided tours of the Reynolds Ranch House and demonstrated hit-and-miss steam engines in action. The museum, with its fully operational stamp mill, interior and exterior mining exhibits, is always a pleasure and wonder to behold.

The place takes you back in time. It is worth the visit . . . even if you aren't a rusty old Colorado relic like me (or the 1927 Osgood Shovel), from a Sunrise long past. 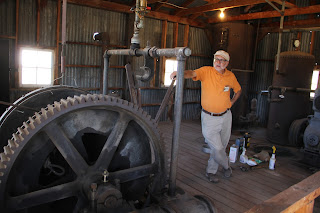 Photo 3 Information:
Executive Director Rick Sauers explains future plans to get a hoist in operation at the museum. Photos by Rob Carrigan.
Posted by ___ Restless Native at 11:23 AM