Potato key from Inca Empire, to Ireland, to Divide country 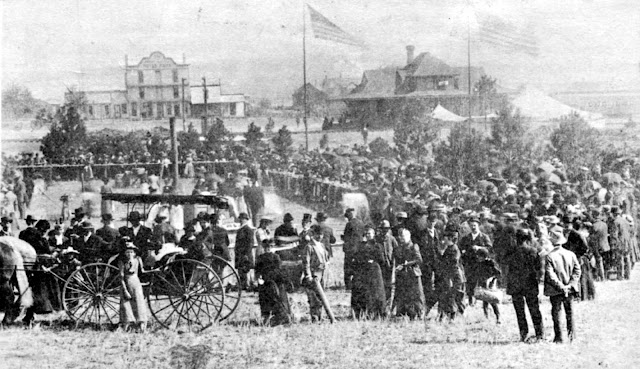 Special trains would bring visitors from near and far to the Monument Potato Bake in 1892. 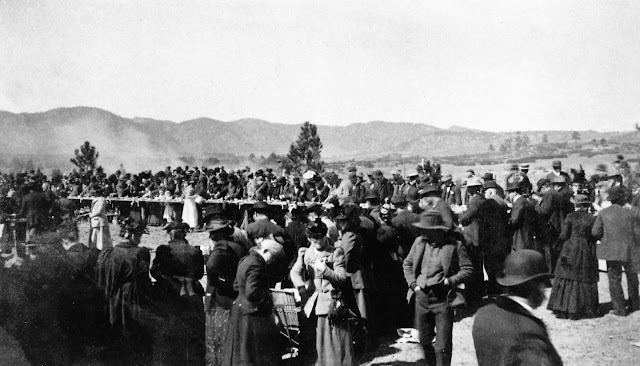 Beef, pork, lamb,  and much were a huge draw for the 1892 Monument Potato Bake. 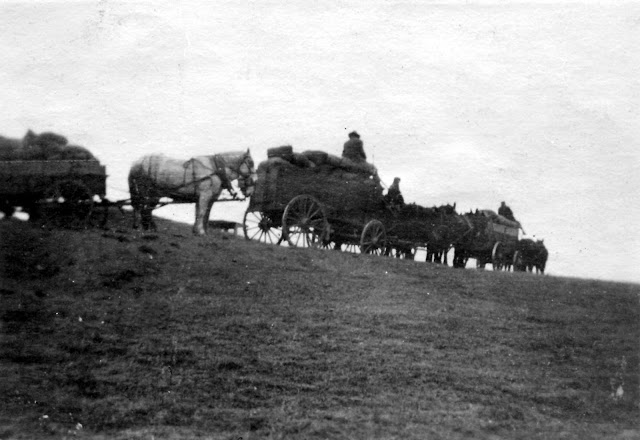 As many as 60 wagon loads a day could be seen in Monument during harvest. 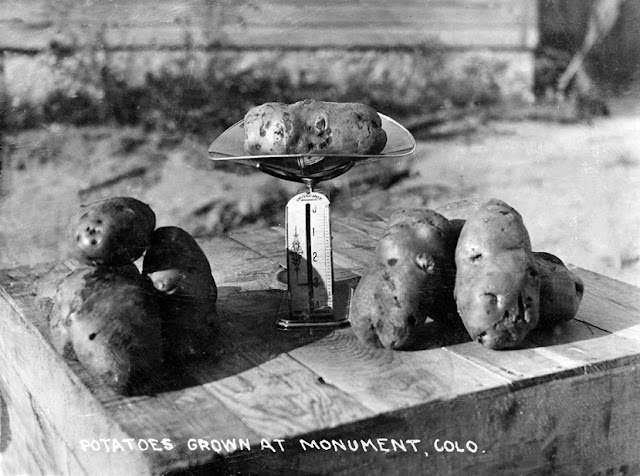 One potato might weigh as much as 3.25 pounds in the heyday of harvest.

For Decades, early October was Potato Bake time in Monument

Potato Bake Day in Monument was celebrated every year for decades in the early history of Monument, just about this time of year, in the first few weeks in October usually. The event helped put Monument and the Divide Country on the map nationally, and established the area's reputation as a top producer in Colorado and surrounding states.
"Yesterday was big day for Monument for the annual Potato Bake," wrote the Oct. 11, 1890 Colorado Springs Herald. "Fully 1500 people came from all parts near and far to enjoy the hospitality. The Mt. Herman band furnished the music for the occasion. The menu was two roast beefs, four roast sheep, two roast hogs, and fifty bushels of potatoes, plenty of home-made bread, butter, cakes, pies, and coffee."
Local historian Lucille Lavelett noted that all this was free as farmers and merchants donated everything, and a committee of men dug the pits, baked the potatoes, and roasted the meat.
"It was held West of the Rio Grande tracks and East of Monument Lake.  In the afternoon there was horseshoe pitching, tugs of war, and a baseball game. At night, a dance in Walker Hall finished the day," Lavelett said.
All in celebration of the remarkable plant that can grow in tremendous range of climates and altitudes and produce more than any other staple crop. The potato, of course, is so basic, it is possible for people to live on them alone. It has changed the arc of history from the rise of the Inca Empire in Peru, to the Potato Wars in Europe of the 17th and 18th centuries, and on to "Great Hunger" in the middle of the 19th century Ireland.
"The Divide potatoes were known as the best potatoes in the country. It was the chief industry," writes Lavelett. "In 1877, the greatest number of potatoes raised to the acre were 25,000 pounds by Paton Wilson. The average number of pounds were from 4 to 6 thousand per acre. In 1875, potatoes sold for 75 cents a hundred. One potato would weigh 3 and quarter pounds ... At potato harvest time, it wasn't uncommon to see 60 wagon loads of potatoes in a day coming in from Table Rock and Gwillimville areas to be stored in Walker's large potato cellar, or to be shipped out. At first Denver and Colorado Springs were the only markets for the Divide potatoes, but Monument soon became a permanent shipping point," Lavelett said.
By 1889, Monument was shipping as many as 380 rail cars of champion potatoes to Kansas, Texas, New Mexico, and Arizona. And special trains were arranged with railroads to bring people to the Bake.
Unfortunately, a blight, thought to have been caused by abundant wild rose bushes locally, eventually took a toll on the big potato crops, and like "Gorta Mor," or Great Hunger, in Ireland, completely changed the local agricultural picture.
In Ireland's case, more than three million people were entirely dependent on the potato, and the failure of the crop left them destitute. Of a better  fortune, the Palmer Divide Country also had rye, and oats, and corn growing.  Local sawmill's blade whirred.  Dairies produced milk, cream, butter and cheese. Beef cattle proliferated.
Monument moved on from the potatoes, though the Bake was still an annual occurrence as late as 1917.
Ah, the Irish moved on as well.