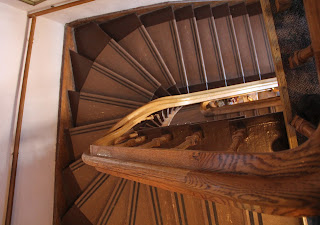 Photo Information: The double-spiral, cantilevered staircase in the main building of the museum offers a rare look of late Victorian woodwork craftsmanship and provides access to all three of the former depots floors. It is supported by exterior walls.

District museum gives us a sense of where we came from

By Rob Carrigan, robcarrigan1@gmail.com
Color, and texture, and flavor of Cripple Creek survives because we are reminded of it, over and over again.
The Cripple Creek District Museum has been reminding us of those very things for more than sixty years. History is old news, I guess, but there is nothing wrong with that.
Founded in 1953 by Blevins Davis and Richard Wayne Johnson, the Museum has five historic buildings, two of which are among the oldest commercial structures in town. Blevens Davis was owner of the Cripple Creek Times, and was involved in changing the name of that paper's name to the Gold Rush. The paper was merged into the Courier in 2007.
Davis grew up next to the Harry S. Truman family and was a lifelong friend and White House visitor of Harry, and his wife and daughter. In 1949, Davis purchased the Claremont Estate in Colorado Springs. The mansion, which he renamed Trianon, was sold to the Sisters of St. Francis Seraph in 1952. Woodmen Sanatorium, also in Colorado Springs, was purchased by Davis in July 1950.
His wife, Marguerite Davis, a railroad heiress died in 1948 and wished to have her fortune used for charitable purposes. The Modern Woodmen Sanatorium property and Trianon were sold to the Poor Sisters of St. Francis (Sisters of St. Francis of Perpetual Adoration) for $1 in 1952. Since that time, the Cripple Creek District Museum has welcomed countless visitors to the "World's Greatest Gold Camp," and given them a glimpse of the thriving, wide-open West of yesteryear.
One-time Museum Director Richard Tremayne understood this as well as anyone. He attended High School in Cripple Creek, and spent much of his life in the district.
He noted, in late 2016 however, the thriving museum continued to show folks, visitors and locals, a thing or two.
If you haven't been to museum for a few years, you might just be surprised. Hardrock Park, for example, dedicated to Jeffrey L. Miller includes cabins saved from demolition in 2003 by Cripple Creek Building Inspector Jeffrey Miller and provided to the museum in 2009.
French Blanche LeCroix' Cabin, from about 1900, is part of the park, and reflects on the women who worked the district as a prostitute on Myers Avenue and later, in the district town of Midway at the Midway Saloon. She lived in the cabin from 1925 until the early 1950s, when she moved to Victor.
The Miners Cabin, circa 1892, was once home to a tinner, T. Rhinnell, in 1896, and later, harness-maker, Robert Brady and laundress wife lived there, at least the first five years of the last century. It is decorated as miner's home, with a few atypical additions such as a rare bathtub, and 1921 Coleman cookstove No. 2, with its original $12.50 price tag on it.
The old standards, of course remain. The Midland Terminal, used by three different railroads over the course of more than 50 years, survived the 1896 fire, and was in continuous operation from 1895 to 1949, with the last ride of the Midland.
The Trading and Transfer Building, built in 1893, by Albert Carlton, is the oldest wooden commercial building in Cripple Creek. Upstairs, in what was once the living quarters for Carlton and his family, you can soak in some more color, and texture and flavor of what it might have been like to live in the District in those early days. It is an excellent reminder of where we came from. I recommend visiting the place, over and over again.
###
Posted by ___ Restless Native at 10:47 AM