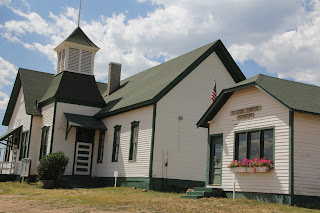 Motorized buses, arriving in the 1920s made longer travel distances possible, and one-room schools were soon consolidated in most portions of the United States into multiple classroom schools where classes could be held separately for various grade levels. By World War II, except in the most rural areas, they were gone.  Florissant Schoolhouse survived locally until 1960.
One of the few complete one-room school education compounds in the western United States, the Florissant Schoolhouse was placed on the National Register of Historic Places in 1991. It includes the schoolhouse itself (now Grange #430), cookhouse (at one time the local Library), teacher's residence, and the boys and girl's privies. The Teacherage, for a time served as the Florissant Heritage Museum.
More than 75 volunteers donated more than 4,000 hours to the restoration of the compound in the early 1990s.
"Harold Kaelin, project manager, donated an astounding 1,695 hours, himself according to an article appearing in the May 6, 1994 Rocky Mountain News by Linda Womack.
The first students graced the doors there in 1887 and continued to do so until 1960 when the school closed. A meeting area was added in 1889, along with the coal shed, which eventually became the cookhouse. The teacherage which appeared on the scene a little after the turn of the 20th Century,  was moved to Woodland Park when the school closed.
The Florissant Heritage Foundation received a gaming tax grant in 1992 from the Colorado Historical Society to restore the compound and the teacherage was moved back to its original location.
The school was also used for dances, weddings, church services, funerals, dinners, parties and programs, and polling places, much as it is used today.
The 1953 Florissant school annual had the following poem in it.

Its hallowed rooms So green and gray,
Have seen lots of work, and yet some play

Yes O Yes we're sorry to go, But just the same
We wish it would blow.

"In 1960 students got their wish as the old school was closed," notes Bonnie Ann Smith, in her recently compiled book Flo-GeoYears, Florisant and Lake George, Colorado. Teller and Park Counties in Pikes Peak Backyard.

"Betty Burns saved many of the abandoned school books to later start a Florissant Library."

Betty Burns told the Ute Pass Courier in early 2004 that "We wanted to build a nice school on the Park/Teller county line and Lake George said 'no way.' Building a school made sense. Lake George was the far eastern edge of Park and we were the far western edge of Teller but Lake George didn't want it. So they got their charter school and we consolidated with Woodland Park. A small school doesn't give children the opportunities that a larger school can."

When the Florissant Grange obtained a 99-year lease of the old school building in 1960, books were still in what had been the old school library, a small lean-to attached to the north side of the schoolhouse. Later in 1970, a small lending library began in the old lean-to structure, and continued to develop, eventually becoming a branch of the Rampart Library District, located in different locations including the county building that also housed the Florissant Volunteer Fire Department. It then moved back to the schoolhouse and finally on into a new building completed in April of 2004.  Florissant Public Library opened a 6700-square-feet structure at 334 Circle Drive in Florissant, where it continues to reside today.