Looking for the fountain of lake's youth? 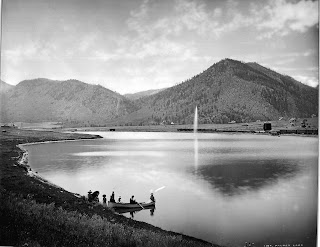 "Whole valley was radiant with flowers; blue, yellow, pink, white, scarlet and purple, vying with each other in splendor."

Dr. Edwin James, a botanist with Maj. Stephen H. Long's 1820 expedition and the first to climb Pikes Peak, also recognized the Colorado Blue Columbines in the area around what later became Palmer Lake.
Then in 1843, Lt. John Fremont noted that the flowers near the "dividing ridge" made a "mountain garden" as the "whole valley was radiant with flowers; blue, yellow, pink, white, scarlet and purple, vying with each other in splendor."
The railroads came through in the 1870s and flowers served as a summertime attraction for tourist from all over.
One of the interesting aspects of Palmer Lake's unique history, to me at least, is its use by the railroads to re-water the steam locomotives of the early days of railroads. As a connoisseur of old photos, I have been fascinated by photos of Palmer Lake showing the fountain in the very early days.
I also remember a Palmer Lake Historical project bearing fruit in 1998 in the form of fountain in the lake.
The June 2, 1998 edition of the Tribune told the tale.
"Once again, Palmer Lake has a fountain, the Palmer Lake Historical Society bought and installed the fountain which will serve two purposes," wrote my friend Jeremy Bangs at the time.
"The fountain is meant to resemble one that was on the lake when it was owned by the railroads. Pipes from the town's upper reservoir once fed Palmer Lake with water and the gravity pressure of the water flow formed a large fountain at the south end of the lake."
Bangs said the new fountain was placed in a different location and didn't throw water as high as the original, but it would aerate the lake's contents, making them more hospitable for fish and other aquatic wildlife.
I don't know for a fact, but I assume the fountain was victim of time and drought that followed.
The lake completely dried up by July 2012 because of drought and water management changes.
In December 2014, the Awake Palmer Lake restoration group began dirt work to clear several feet of sediment from the north end of the Lake, exposing the top of the clay (benzonite) layer and filling the southern marsh with dirt. This served to resort the lake to its historical proportions and also to make it more sustainable for the future.
The volunteer group, at the same time, was working on a plan to have Palmer Lake refilled with water by spring of 2014. Palmer Lake's refill involved a court case involving water rights that the town of Palmer Lake  said it was granted in the late 1950s. Town leaders in neighboring Monument have objected to Palmer Lake's request. A state Water Court decision is expected to to determine that.
Meanwhile, in early December 2014, an extensive dirt work project restored the Lake, close to its historical proportions.
In mid-December, 2014 received word that  a Great Outdoors of Colorado (GOCO) grant of matching funds to total $350k had been awarded to be used to build a footbridge and recreational park around the lake and an the west side of the railroad tracks.
In February 2015, an agreement was reached with the town on Monument, as well as other communities, which allows the town of Palmer Lake to exercise senior railroad rights for the purpose of filling and maintaining the lake.
After the wettest May in over 70 years in 2015,  rains and spring activity filled the lake, to almost eight feet on the north end.
Also after June 24, 2015, Palmer Lake water supervisor Steve Orcutt began sending almost six ac/ft of water into the lake. Palmer Lake's industrial water rights were changed to residential, the town now fills the lake with up to 8.4 acre feet per month, and up to 67 acre feet per year. Drinking and household water needs still have top priority over recreational and aesthetic uses. 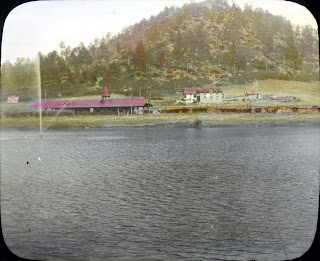 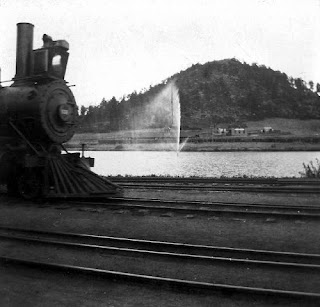 Photo 1:
Fountain is visible in this early photo of the lake, looking west.
Photo 2:
This early hand-colored photo shows the fountain and the Santa Fe Depot.
Photo 3:
Looking east, from the tracks, the fountain is shown beyond a steam locomotive.

Photos courtesy of Palmer Lake Historical Society
Posted by ___ Restless Native at 4:40 AM