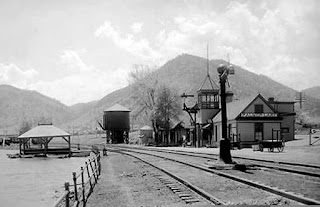 Those swaying, lurching trains made it possible for Colorado's mines to expand and prosper

Two Colorado pioneers were liquored up, and were walking the upgrade between the railroad tracks. One of them said, "this is is longest stairway I have ever been on."

To this, the other replied, "It's not the stairs that bother me, it's the low banister."

About 175 different railroads laid track in Colorado, and many had ties to mining industry here. Right from the start, it was the grade that challenged most of them.

And railroad builders challenged it back by changing the gauge. At the time most railroads in the state were being built, about 60 percent of the world's rail track was spaced “standard gauge” of 4 foot 8 1⁄2 inches in allowing inter-connectivity and inter-operability.

One common legend places that as the rut distance between chariots dating back to the heydays of the Roman Empire.

"The Denver and Rio Grande (D &RG), biggest and best known of all Colorado railroads, was incorporated in 1870 by William J. Palmer and some associated. Palmer introduced narrow gauge track 3 feet wide that could be installed for about two-thirds the cost of standard 4 feet and 8-1/2 inch gauge. It could also tackle higher curves and steeper grades," says the Historical Atlas of Colorado put together by historians Thomas J. Noel, Paul F. Mahoney, and Richard E. Stevens.

Later, it became the largest rail network and was reorganized later as the Denver and Rio Grande Western in 1921.

"The D & RGW remained an independent Denver-based outfit even after owner Philip Anshutz purchased the Southern Pacific in the 1980s. In the 1990s, to the dismay of Colorado rail fans, Anschutz began replacing the D & RGW with Southern Pacific livery. While 'Colorado's Pet' is a favorite with rail fans, critics claimed that D & RGW meant 'Dangerous and Rapidly Growing Worse,'" according to Historical Atlas of Colorado.

Sam Speas' and Margaret Coel's wonderful book about two generations of Colorado railroad engineers, called "Goin' Railroading," talks about the race to the mountains in this state.

"Those swaying, lurching trains insured Denver's future and made it possible for Colorado's mines to expand and prosper. From the discovery of gold in Colorado in 1858, until the first railroad arrived in 1870, the mines produced $32 million in gold, silver, copper, and lead. In the next twelve years, with railroads crisscrossing Colorado, mining production leaped to $163 million," according to Speas and Coel.

Interestingly enough, Speas father arrived at offices of the Union Pacific, which gained control of railroads in Northern Colorado in 1881, the master mechanic took a look at his letter that said he was "honest, sober and attended strictly to business," and cheerfully recommended him for employment. He was hired right away, and nothing was said of the upgrades, long stairways to mountain mining towns, or the low banisters. 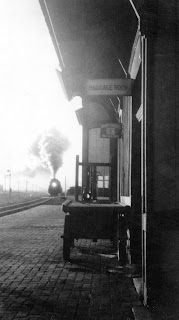 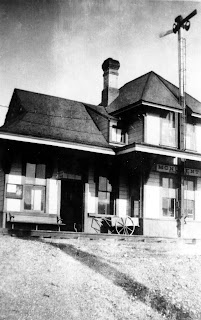 Photo 1: William J. Palmer's "Baby Road" headed south out of Denver creating the towns of Castle Rock, Palmer Lake, Colorado Springs and El Moro along the Front Range. This is the Palmer Lake Depot and Judd's Eating House in Palmer Lake in 1908.

Photo 2: Monument Santa Fe Depot with creamery in the distance.

photos courtesy of Lucretia Vaile Museum
Posted by ___ Restless Native at 8:57 AM