Years of friendly, local service in one spot 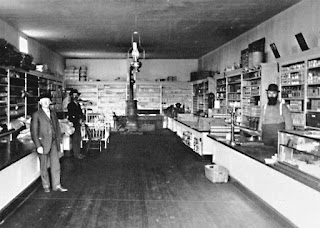 Monument pioneer William "Penny" Lierd earned his nickname as payback for a coffin purchase.
"Mr. Lierd, a very honest man, always paid his debts and he expected everyone to do the same. He sold a coffin to a party and they would not pay so started to sue. They finally came and paid for the coffin, $50; they brought the money all in penneys and made him count it out.  From then on, he was known as "Penny Lierd," according to an account by Monument historian Lucille Lavelett from 1970s,
That could have been just about any time after 1882. The store Lierd built at 243 Washington, started construction sometime in 1881, and carried a sign for a long time saying "established 1882.".
He first set foot in Monument in 1870, coming to Colorado to heal his lungs from tuberculosis, buying a 280-acre ranch, north and east of town on the Douglas County line.
But William "Penny" Laird was just one in a long line, of civic-minded shopkeepers in what is now Catriona Cellars.
"This is really a great community, " says "Woody" Woodworth, who conducted business there for for about 20 years and still manages winery operations. "We bought the Feed Store business in January of 1996."
Woodworth and his wife Catherine later expanded the feed business to "High Country Feed and Garden," a top Garden Center and later added other elements. A few years ago, they undertook a major renovation as Winery, restaurant, and wine-making and home-brewing supply store, but have since consolidated the winery operation.
He was still dabbling in landscape, planting and other elements then, but, as he says, "That is a younger man's game. It's a lot of work, very physical. "
The wine business has taken off, he said. "Wine Sales are huge," he says and the downtown is poised to really take off. "It's historic, well-maintained, family-friendly, quaint, and unique, with a bunch of personable people operating businesses. It is the strength of the individuals."
Over time, the buildings of the Winery have housed various businesses and endeavors.
Early on, a cellar there served as jail for wide-open Monument. "We found the bars," says Woodworth, about their restoration work on a portion of the property. "It looked like there was possibly three partitions to divide cells."
Lierd, the first proprietor, sold dry goods, shoes, groceries, caskets and coffins.
Records show that men socks brought 25 cents for three pairs. Shoes priced at $2.50 a pair and hard candy were popular items, as was plug tobacco, with a special plug cutter right there on the counter.
"On each pound strip of tobacco were five tin horse shoes or stars which were good for premiums.  If a customer didn't want the horseshoes Mr. Lierd would ask for them," Lavelett related in histories. "Will Lierd's son, Clifton, told me the Lierd's had a dining set acquired by sending in 70,000 horseshoes."
In fact the Lavelett Truck line was located there at one time in the 1940s, notes Woodworth, as well as Engel Feed and Fuel in 1950s, the Fire Department in the 1960s, and the Equity Produce and Mercantile, which was a farmer's Co-op operating in 1922, by J.R. Close and C.C. Garrett. Elsi Romack Newbrough was clerk in 1918.
Woodworth said people of a certain age, would come into the business and recall playing bingo as children in the fire hall, and Engel descendants still live in the Tri-Lakes area.
He and his wife Catherine purchased the feed business from Judy Bliss, who acquired it in 1980. Artist Jodie Bliss, daughter of Bill and Judy Bliss, now has her studio there, and the Bliss family still maintain ownership of the historic location. 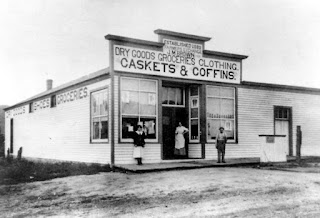 Photo1: Interior of Will "Penny" Lierd's store on Washington Street in Monument in the 1880s, and left to right: Will Lierd, Fred Sailor, the man with the derby hat and whiskers, Andrew Curry.

Photo 2: Built in 1881 by William Leird, better known as Penny Leird, General Mercantile store, and stocked with groceries, meats, farming equipment, — anything the town's people of Monument would need, they carried. Also they had a full line of coffins and caskets. At this time in history funeral parlors were unheard of. Standing in front of the store is Nellie McShane, owner at this time J.M. Brown, and Jessie McShane. The McShane girls were daughters of Monument pioneer David McShane. McShane was the builder of McShane Fort on the edge of Monument and Palmer Lake., and the girls were employed by owner Brown. Monument Fire Department bought the building in 1966, and renovated it. Carl Campbell was the Engineer of Renovation, and Bill Simpson helped by grading and moving heavy timbers.

Photo 3: The building for a time served as Catriona Cellars, owned by Woody and Catherine Woodworth. Today, it is the Bliss Studio and Gallery: Custom Metal Work. 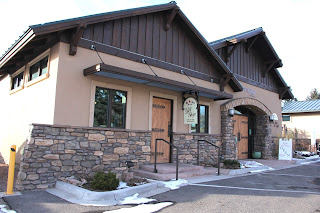