75 years and golden memories of district past 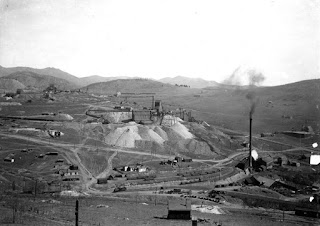 A certain amount of time in history offers a unique perspective, I think, maybe 75 years is that perfect distance — where no one remembers well enough to tell you are wrong about your observations, but just enough connection exists linking you to the present, that you could be perceived as being right. I found myself there last week as we toured current activity in mining district.

Back in time 75 years, The Chicago Tribune, Oct. 21, 1941, reported it this way.
"Stream of Gold Flowing Again in Old Cripple Creek Area," headlined.
"The mining industry of the famous old Cripple Creek area that was pouring out 20 million dollars worth of gold a year at the turn of the century, is stepping up its operations aided by a six mile tunnel," the story reported


Type of gold seeker seen frequently in the earlier days.
"The romance of that rough and tumble era when fortune seekers sang the ditty about 'to Cripple Creek' still is only a ghost that haunts the mountains, but a stream of gold is flowing again and will exceed 5 million dollars this year.
Less colorful but more efficient miners were going down 3,000 feet or more below the surface to blast the ore out of the heart of the mountains that rise more than 14,000 feet above sea level.

Tunnel Drains Water.
"In order that the miners can go even deeper into the earth, a six mile tunnel-named Carlton Tunnel- was blasted through almost solid rock into the mining area to drain off water that seeps into the mines. Carlton tunnel goes into the mountains at 7,000 feet above sea level and was completed this summer in three days less than two years at a cost of about a million dollars," the Tribune explained.
"Gold mining is a depression business," said Max W. Bowen, vice president of the Golden Cycle Corporation, which smelts more than 90 percent of the ore produced in the Cripple Creek area. "The price of gold has remained $35 an ounce for a good many years. When labor and production costs are low, more gold can be mined.
"This year production In the Cripple Creek area will be the largest in the last decade. Value of the ore, however, will not be much larger than last year because of the smaller gold content."

Expect 15 Million Output.
"For every ton of ore-bearing rock brought to the smelter in 1940, an average of 0.29 of an ounce of gold was removed. We expect to smelt around 550,000 tons of ore this year that will have a total value of $5,500,000, about 13 per cent of the ore coming from outside the Cripple Creek area."
Bowen said the federal government took the entire output of the smelter. Once a week an armored car comes to Colorado Springs from Denver to pickup the bar of gold produced that week to haul it to the mint.
Cripple Creek's gold mines, Including those at Victor, are the largest in Colorado. Since 1891, when a wandering cowboy searching for lost cattle discovered gold in the area, the Cripple Creek district has figured prominently in the history of the west.

Who was operating in the district.
"Capitol's Who's Who for Colorado: A Triennial Reference Work 1941-1943," imprinted on the leather cover. Copyright 1941 by the Capitol Publishing Company, tells the tale.

"A man's true greatness lies in the consciousness of an honest purpose in life, founded on a just estimate of himself and everything else, on the frequent self-examinations, and the steady obedience to the rule which he knows to be right," the book quotes Marcus Aurelius in the forward.
R.O. Norman, editor wrote in January, 1941, "We have given frank recognition to lineage; to those founded in the native soil; to those destined to become the the ancestry of future generations of Colorado. These are the names which make the history of our state, making the work a contemporary history book."

Just a year later, a different story developed in the District. War Production Board Limitation Order L-208, issued on Oct. 8, 1942, forced the closing mines here and all over the nation.
Posted by ___ Restless Native at 8:01 PM

My great uncle Frank Peters worked on the Carlton Tunnel and his brother, my maternal grandfather, Bus Peters, helped build the Carlton Mill. They both served in WWII. Frank was in the Army and Bus in the Navy.