Can anything better be said of any old animal, or any old man? 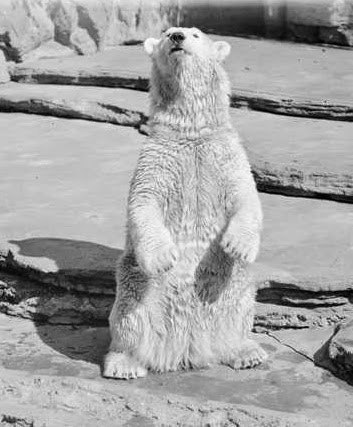 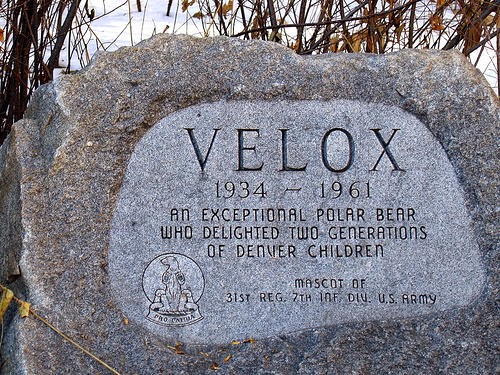 (A monologue with Velox, blind polar bear which is slowly dying of old age at the Denver Zoo.)
I know how it is, old gal. Back’s weary, joints ache, too tired to eat any more. Just want to lie down and sleep. Doze softly in the sun…a long, long time.


I’ve seen that look around the eyes before… of old animals and old men. Though lost to sight, they look a far, far way. Far from the crippling aches of age. Far from the bars of the cage of life. Deep into the gray distance where old men and old animals meet in common quietude.


I saw the look one winter’s morning in the eyes of an old Airedale. As the film closed in, they saw for the last time the precious corners of the neighborhood where he stopped on his morning rounds. They saw the sun-flaked mountains which once his strong, young legs had conquered. And he stretched out in the inevitable meeting place which you today are sensing.


It broke my heart. It breaks my heart this morning to see you bent under the burden of life which once was fresh and sweet.


But I should feel much better if I only knew. If I only knew, old gal, that you realize the joy you have given for 20 years to Denver’s children. And to men with the hearts of children who are growing old themselves.


Sam had his streets and mountains. But you have had a fairer picture. An endless panoply of children’s faces which you have made to shine. And I pray that in these latter hours you know that this is true. For, if you do, I shall feel much less the sense of guilt I’ve always had because of the cage’s bars.


I know that bars are never sweet. I know the misery of only walking back and forth, back and forth. Never able to turn around because as a cub you were forced to live in a narrow circus cage. More desirable by far would be the freedom of ice floes, of the arctic storms, of the winter’s midnight sun. I know all this in sorrow.


But, after all, old gal, none of us can fully shape the pattern of his life. And none of us, as years restrain our efforts, is completely free. What we come to prize most, as wiser we become, is the inner satisfaction that we have been useful to someone. That someone needed us. That someone was happier because he passed our presence.


And so, old gal, bear gallantly these aches and ills, for there are thousands of children who are bearing them with you.


Bend quietly under the burden of years, for there are other old animals and old men whose backs are likewise bent.


Gaze peacefully toward the final meeting place, for you will not be forgotten.


And, when the burden is ended, I hope they will bury you on the hill where other mirth-giving animals are covered. And on a headstone I hope will be written this paraphrase of the inscription above a grave in an early Colorado mining camp.


VELOX. She did what she could…


Can anything better be said of any old animal or any old man?

Maybe it is one woman. Perhaps it is several. Conceivably, it is every one I have ever known.