Her story to tell, first to the top 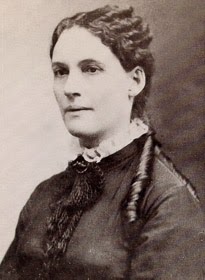 Holmes was, in fact, the first woman recorded to have climbed a 14,000-feet peak in North America.

Even though I have two pioneer-spirited daughters, I don't always think of how women in history seem to be neglected in a male-centric telling of the story. Besides that, breaking boundaries and being the first to do something seems somewhat more of a male obsession anyway. But you know my feelings about history, and telling stories.
Of course women have, and can tell stories of their own.
In 1766, Mary Katherine Goddard and her widowed mother became publishers of the Providence Gazette newspaper and the annual West's Almanack, making her the first woman publisher in America. That was a notable first for Goddard, but it wasn't really her last notable first.
In 1775, Goddard became the first woman postmaster in the country (in Baltimore), and in 1777 she became the first printer to offer copies of the Declaration of Independence that included the signers' names. In 1789 Goddard opened a Baltimore bookstore, probably the first woman in America to do so.
In 1767, Anne Catherine Hoof Green took over her late husband's printing and newspaper business, becoming the first American woman to run a print shop. The following year she is named the official printer for the colony of Maryland.
Locally, let's mark another important first. Certainly not the first to tell it, but here goes...
As James McChristal wrote in his 1999 book "Pikes Peak: Legends of America's Mountain," Anna Archibald Holmes was an ardent feminist and suffragette. "She and her husband, James, also accompanied the Lawrence party to the mountains (of Colorado in 1858)."
A companion of Anna Holmes described her as a "regular women's righter, wears the Bloomer, and was quite indignant when informed she was not allowed to stand on guard. She is young, handsome and intelligent."
As Holmes noted at first sight of the summit, after leaving Bent's Fort on the Arkansas, she decided to climb it. Even though "nearly everyone tried to discourage me from attempting it."
Aug. 1, 1858: "My husband and I adjusted our packs to our backs and started for the ascent of Pikes Peak. My own pack weighed 17 pounds; nine of which were bread, the remainder a quilt and clothing. We reached the wonderful Boiling Springs. We drank deep... in another mile were vigorously attacking the mountain. The first mile or so was sandy and extremely steep, over which we toiled slowly."
Aug. 2, 1858: "Two days of very hard climbing has brought me here," she wrote to her mother. "My strength and capacity for enduring fatigue have been very much increased by constant exercise in the open air."
Aug. 4, 1858: "Eastward, we can look on a landscape of Kansas plains, our view hemmed only by the blue haze of the atmosphere, and extending perhaps 200 miles. The beauty of this great picture is beyond my powers of description... We are on the east side of the Peak, whose summit looming above our head at an angle of 45 degrees, is yet 2 miles away — toward the sky."
Aug. 5, 1858: "We left... early this morning for the summit... Arriving within a few hundred yards of the top the surface changed into a huge pile of loose angular stones, so steep we found much difficulty in clambering up them... We stood upon a platform of near 100 acres of feldspathic granite rock and boulders. Occasionally a little cranny amount the rocks might be found in which had collected some coarse soil ... where ... we found a green tuft about the size of a teacup from which sprung dozens of tiny blue flowers most bewitchingly beautiful. The little ultra-marine colored leaves of the flower seemed covered with and infinitude of minute sparkling crystals — they seemed children of the sky and snow. It was cold and rather cloudy, with squalls of snow, consequently our view was not so extensive as we had anticipated. A portion only of the whitened back-bone of the Rocky Mountains ... could be seen, 50 miles to the west. We were now nearly 14,000 feet above the sea level. But we could not spend long in contemplating the grandeur of the scene for it was exceedingly cold."
When she reached the top, she finished the letter to her mother.
"I have accomplished the task which I marked out for myself, and now feel amply repaid for all my toil and fatigue ... In all probability I am the first woman who has ever stood upon the summit of this mountain and gazed upon this wondrous scene ... Extending as far as the eye can reach, lie the great level plains, stretched out in all their ... beauty, while the winding of the great Arkansas is is visible for many miles ... the almost endless succession of mountains... the broad blue sky over our heads, and seemingly so near... everything, on which the eye can rest, fills the mind with infinitude, and sends the soul to God."
Holmes was, in fact, the first woman recorded to have climbed a 14,000-feet peak in North America. She later became a reporter for the New York Herald Tribune, worked for the U.S. Bureau of Education and became the Secretary of the National Woman's Suffrage Association.