Duke's impact and connections to the homeland 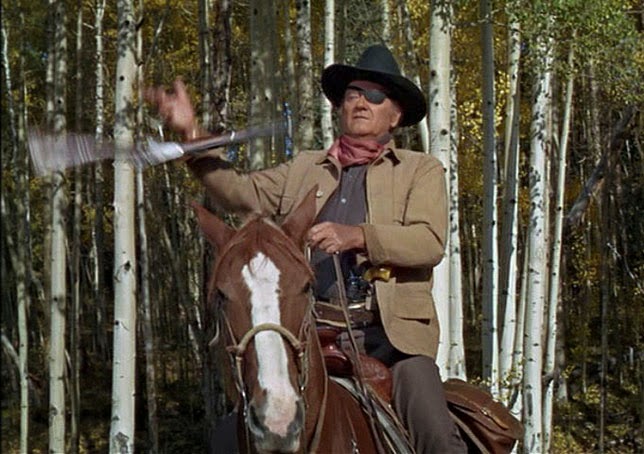 Rooster Cogburn (played by John Wayne) confronts the four outlaws across the field.
Ned Pepper (played by Robert Duvall): What's your intention? Do you think one on four is a dogfall?
Rooster Cogburn: I mean to kill you in one minute, Ned. Or see you hanged in Fort Smith at Judge Parker's convenience. Which'll it be?
Ned Pepper: I call that bold talk for a one-eyed fat man.
Rooster Cogburn: Fill your hand, you son of a ...!

__ From the 1969 version of True Grit, Directed by Henry Hathaway, Written by Margueritte Roberts, based on the novel by Charles Portis.


The big star was connected to area in other ways.

I just finished Scott Eyman's 2014 bestseller "John Wayne: The Life and Legend" and I am struck by how much impact a figure from the silver screen can have on a person— namely me.
Having grown up in southwestern Colorado, where the actor was almost woven into the fabric of the area, I feel connected, like he was a not-too-distant relative, (maybe  great-granddad or something).
Part of it, has to do with location.
Monument Valley, location for multiple John Ford westerns that molded Duke Morrison from a "B"movie crew member into the larger-than-life John Wayne, and sets him up as an American icon, straddled the Utah and Arizona border. Other films were created near Mexican Hat and it all, was not so terribly far from my boyhood home in Dolores, Colorado. If you followed the streamflows back uphill, to locations of the "Sons of Katie Elder," "True Grit" and other films, it meandered its way up the Dolores River, over Lizard Head Pass and high into the San Juan Mountains of Ridgway, Ouray, over Dallas Divide and into Montrose, where I was born.
Deb's Meadow, near the summit of Owl Creek Pass, with Chimney Peak and Courthouse Mountain featured in background, is where the film scene above took place. Duke used a trick similar to the one he learned for opening scenes of "The Searchers" of Monument Valley fame, in which a customized, sawed-off Winchester Model 1892, could be twirled to cock under his arm with just one hand.
"For his close-up, with reins between his teeth, twirling and cocking one-handed as he bore down on the outlaws, Wayne was not sitting on a horse, but on a saddle mounted on a camera car," wrote Eyman, in his recent book.
The hanging scene early in the movie was filmed in the Ridgway Town Park and Chin Lee's Place was on Clinton Street there. A little bit further up in Ouray, at the Court House, some of the court scenes were in the real thing there. The Ross Ranch, where the aging Wayne did his own horse jump for the freeze frame at the end of the movie, is out, off Highway 62, on the Last Dollar Road.
The truth of the mater was, that the big star was connected to area in other ways.
Today, thanks to the Pauls Family Work, large areas of the forest are accessible, and even that has ties back to Wayne.
Glen Pauls said he first came to the area with his family in the 1970s. After decades of planning, purchasing land, and dreaming, Glenn Pauls, his wife Dianne, and the Pauls family have transferred the first phase of the Ophir Mining Roads Public Access Preservation Project to the United States Forest Service. This transfer includes 109 acres and three building sites in the Water Fall Canyon area. These lands can never be developed and can never be closed to public motorized access.
"From there we came back nearly every year to motorcycle and jeep the trails, and we began to buy land. I now have approximately 1200 acres, almost all, of the mining claims in and around the Ophir Valley my parents and I have purchased since the mid 80s," Glen Pauls described how their efforts took shape.
"It started when I was told of a deal by realtor Bob Forsberg, where I could buy the entire holdings of John Wayne (the actor) and Donald Koll, who had planned to build a silver mine or ski area. The Hunt brothers and Telski dashed their dreams, and we bought them out. The path to preservation was conceived," he said.
Self professed "cowboy hippie" lawyer Dick Unruh, who still calls Telluride home, represented John Wayne and Ed Smart in a land transaction related to East Ophir when he came to the area in 1972.
In 1972, according to Unruh, pre-ski area, only about 400 people lived in Telluride.
And and though I have not been able to verify or prove it, I believe I ran into the Duke up there one year at the annual Fourth of July celebration, as military jets from Pete Field preformed a flyover worthy of the star's enthusiastic military support, and a better-than-average parade snaked down the main street. I think I probably have seen all of his movies, most before his death on June 11, in 1979.
Eyeman says John Wayne became not only Hollywood's most famous and successful actors, but in the process became a symbol of America itself — for better and worse.
It has made me wonder about a great number of possible ties of my home ground over the years and speculate about connections to the early film industry. For example, the most-storied bar there being known as the Hollywood, and the three-storied Del Rio Hotel finished in the early 1930s reportedly being frequented by Clara Bow and perhaps others, but I am also intrigued by the name itself, as Dolores Del Rio was one of the top starlets of the 1920s. With director John Ford (and his biggest star John Wayne) doing a lot of work in Monument Valley in the 1930s it doesn't seem to be out of the realm of possibility.
At Pacific View Memorial Park, in Newport Beach, California, a stone was placed years after Duke's death in 1979, on his grave and carrying a quote by the legend himself.
"Tomorrow is the most important thing in life. Comes to us at midnight very clean. It's perfect when it arrives and puts itself in our hands. It hopes we've learned something from yesterday." 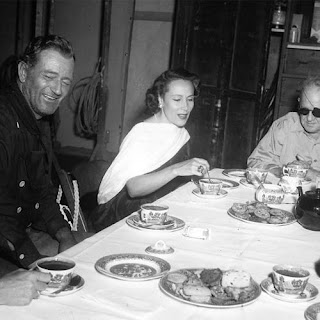