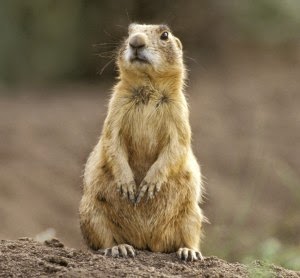 A beginning, middle and...  the end

Every storyteller knows about the rule of three.
Beginning, middle, and end. Tension, build up, and release. Omne trium perfectum (Latin for 'every set of three is complete').
I have early experience with the concept.
Ranchers were scrambling to gather the last loads of hay at the end of one summer in the early 1980s. I was helping Dale Johnson and his wife Joy, after I got off work at the hardware store. The three of us were bucking bales out on the Ridge, and hauling them by trailer to their place up river.
Usually, because we didn't get started until after 6 p.m., only about two loads a night. But we were almost done, and going to try for three this evening.
Three in the truck, three miles from town. Three loads to go.
As Dale maneuvered around trees from what used to be an apple orchard, and into the hay field out there, he spied a prairie dog, about 30 yards out.
My experience with prairie dogs was they were universally hated by anyone in the farming and ranching industry. So, it was no surprise to see him stop the Chevy pickup, jump out, pull a Winchester Model '94 (.30-.30)  out of gun rack behind our heads, lay the rifle over the corner of the hood, and take a shot.
Report. Missed. About three inches high, and from what I could see, as the slug thudded in the yellow dirt behind, and maybe tad to the right. I filed away that info, and the varmit made itself scarce for a while.
We had no time to worry too much about that, with maybe 300 bales to get in the barn tonight.
We load the bales on the trailer as quickly as we can, keeping with the schedule.
Back in the truck, we are sweating like a doughnut at the police station.
Schlitz beer on the ride back to the ranch. Unload when we get back there, with help from Dale's and Joy's three daughters. And then back out to get another load.
Pulling into the field again. Prairie dog is in the same place.
Stop, Dale grabs the rifle again. Braces, at about the same distance, fires.
Same result. Three inches high, a little to the right, thump in the dirt. I take note. Varmit evaporation.
No time to worry about that. We are burning daylight. We are going to have to hustle to get three loads tonight. And hustle, we do.
Trailer is full again, we are sweating like a long tailed cat in a rocking chair factory.
Another Schlitz on the ride to the barn. Go for the gusto.  Unload, quickly, and back to finish the job in hay field before pitch dark.
In the growing twilight, the Chevy pickup eases around the apple trees and sure enough, the king of all prairie dogs on his hind legs in the center of the hole.  Once again, Dale jumps out, grabs the .30-.30 and levels it across the corner of the hood. But just as he is about to squeeze off another one, ...  Joy says, "Why don't you let Rob give it a shot?"
Dale finds logic in the suggestion. And hands me the rifle.
I am little too short to lay the walnut of the carbine over the hood. So I crouch in the dirt, steady, work the lever, steady again,  and remember three inches high, little to the right. Adjust slightly, and pull the trigger.
Dead 'dawg' parts fly all over the back side of the hole and into the yellow dirt behind.
We load the trailer's third load before dark. Over 300 bales in the barn by that evening.
Sweating like Elvis at the breakfast buffet. Third Schlitz on trip in. The three girls help us unload the trailer when we get there.
A beginning, middle and...  the end.

Jake would have admired you.