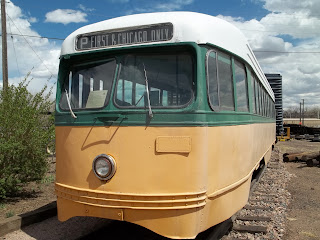 One of the "War Babies"

Presidents' Conference Commitee (PCC) cars were built for many cities from 1936 to 1951. The PCC cars ordered by Los Angeles Railway were narrow guage (3 feet, 6 inches). Production of PCC cars was halted when the United States entered World War II.
In 1943, an exception was made and Los Angeles Railway received 30 cars to transport workers employed in critical war material industries.  No 3101 was the sixth of these "War Babies" and began operating in late November 1943,  under Los Angeles Railway colors. By 1945, it had become a Los Angeles Transit Authority car until 1958, then later as Los Angeles Metropolitan Transit Authority car, when its last run was March 31, 1963.
It was 20 years old and in need of a general overhaul.
Shortly after retiring, it was moved to Cripple Creek for Gold Camp Railway and Museum where it ran for a short time on 900 feet of track until it was purchased in 1969 by the Rocky Mountain Railroad Club and moved to the Colorado Railroad Museum. It was leased in 1994, to the Pikes Peak Historical Street Railway Foundation (PPHSRF) and then purchased by that group in 2006.
Of the 30 "War Babies" built, only two have survived the scrapper. The other car is in operation at the Orange Empire Railway Museum in Perris, California.
As far as Car No. 3101, "Plans are to overhaul the car for daily transit operation in Colorado Springs in due course," according an information sheet in the window at the Pikes Peak Historic Street Railway Foundation and Museum at 2333 Steel Drive, in Colorado Springs.
###
Posted by ___ Restless Native at 3:03 PM