Scientific observations from across the years and around the lake 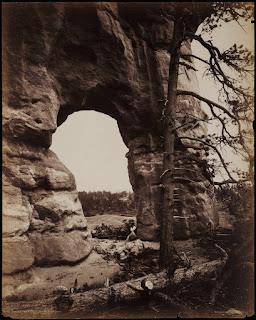 Looking at your stony trunk for more than a century

I found some interesting notes from the Proceedings of the Colorado Scientific Society's road meeting held in November, 1892. The presentation at that program was developed by Geo. L. Cannon, Jr. who identified himself as a lecturer at the Rocky Mountain Chautauqua Assembly in the previous season. He titled it: Notes on the Geology of Palmer Lake, Colo., and the Paleozoic Exposures Along the Front Range.
"A scarcely perceptible erosion ridge runs through town, from the base of Mt. Thompson to the Arkansas-Platte divide — the beginning of the crest of that great tract of upland country that projects far out into the area of the great plains. Near the Rio Grande Pavillion, drops of rain separated by a few inches space will start on that long journey to the Gulf by widely diverging paths, some falling north into Plum Creek drainage, and seeking the "Father of Waters" by way of Palmer Lake, Plum Creek, the Platte and the Missouri rivers; while other drops fall southerly into Monument Creek which joins Fontaine qui Bouille at Colorado Springs, this intern, the Arkansas at Pueblo, which empties into the Mississippi 400 miles below mouth of the Missouri River," wrote Cannon.
The report mentions distinctive landmarks in this area.
"The views from this point are amount the most beautiful in Colorado. To the west rise the precipitous walls of Mt. Hermon,  Mt. Cannon, Chautauqua Crest and Mt. Thompson, towering 1,500 to 2,000 feet above the valley. to the east, the curious 'Elephant Rock,' Phoebe's Arch, the Lion Head and castellated summit of Monument Creek, with its far-reaching, pine-clad mesas and frequent exposures of brilliantly -tinted rocks of fantastic forms. To the north lies Palmer Lake, and valley of Plum Creek, filled with numerous buttes, mesas and flat-topped ridges separated by gentle, undulating valleys, The gentler slopes are carpeted with a growth of silvery-green herbage, that contrast admirably with clumps of oak brush and dark pine forests, and with the warmer tints of the sandstone and granite exposures. In the early summer the hill sides are often a mass of purple-blue, or gold from the acres of abundant mountain flowers. the scenery of this vicinity differs from that of the points along the foothills, in the substitution  of mesas and buttes for the usual hogback configuration," he said. 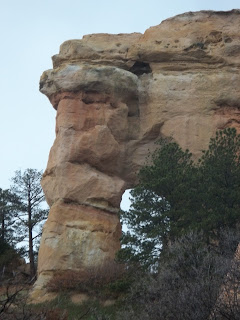 Photo info: Top photo is relatively famous photo by William H. Jackson about the time the preceding observations were made. Bottom photo taken near Elephant Rock this week.
Posted by ___ Restless Native at 1:35 PM