Hart Lee on the Hardware Store in the Star 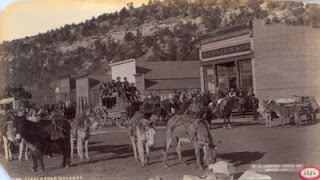 The Best of Hart's Stuff from Rico


By Hart Lee,
The Dolores Star Press
copyright, 1968,
compiled, edited and published
by Lawrence and Marilyn Pleasant
MCMLXVIII
From the Files of the Dolores Star
(also known as The Splatter)

Did you ever go into a store or someplace of business and and come out with more than you bargained for — Now for instance take Taylor's Hardware store, we have been trading there off and on for the last twenty or thirty years. Any time you go in there the first thing you see is an old beat up water bucket setting the front counter slushing over with hospitality — been setting in the same place ever since old Sy Perkins bought his wife her first two piece under ware. Then the two pouch hounds which are the trade mark of the joint are always found asleep in front of the nail rack — and should they be missen, you'll find the outfit out of gear and running on the rocks.
Sometimes you just drift in the place don't want to buy a thing, then you find a comfortable chair and watch television which is turned on as soon as the janitor shows up in the morning until its time to lock the doors, and you'll always find somebody around that's got time to shoot the bull for awhile. In fact nobody is in very much of a hurry. Take your time and live.
A lot of times you'll go in and ask for something — say a ram rod for a 10 gauge shot gun, well it might take a little while to find 'em but its a bet they have a dozen of the things when they do run them down.
And if they don't have what you want they'll grab a want book and order it for you whether it is a pound of roofing nails or a trainload of combines — Just a darn nice place to trade.
Posted by ___ Restless Native at 8:15 PM