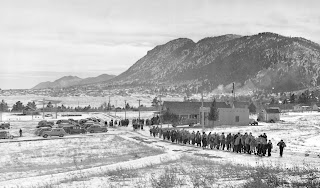 Warm your heart in the spirit of the season

A heart-warming celebration of holiday season, steeped in tradition, and shared with friends, has way of taking the edge off tough times.
To put things in context, a person has to think about what was going on back in 1934.
That year turned out to be the worst year of the ‘dust bowl’ and the depths of the ‘Great Depression.’ Dust storms ruined nearly 100 million acres and damaged another 200 million acres of cropland in Kansas, Texas, Oklahoma and Colorado. The gross national product of this country was cut in half from 1929 to 1933 and nearly 16 million people -- a third of available work force -- were out of work. More than 2 million were homeless and President Franklin Delano Roosevelt was forced to declare a ‘bank holiday’ the day after his inauguration.
Also in 1934, Adolph Hitler became the Fuehrer of Germany when the chancellery and presidency were united. Bonnie and Clyde died in a bullet storm from automatic weapons fire and shotgun blasts (at least 130 rounds) in an ambush by Texas and Louisiana lawmen. John Dillinger suffered a similar fate outside a movie theater in Chicago. Mao Zedong began the ‘long march north’ with 100,000 soldiers. And to boot, the year goes down in the record books as the warmest in history. Remarkably, it still holds that record.
But here in Palmer Lake, in the festive spirit of the holidays, it was shaping up as year to remember.
For 1934 was the year that a small, well-dressed librarian in a hat, who loved the arts, brought back a splinter of a log from Lake Placid, New York.
Though Lucretia Vaile is fondly remembered for many accomplishments and noteworthy acts of kindness to the town she loved, the founding of the Christmas Yule Log Celebration stands out, especially this time of the season. It has become one of the most enduring and endearing celebrations of the holiday spirit in the state and perhaps the nation. Coincidentally, just one year later, another long-held tradition -- the lighting of the star on Sundance Mountain, helped seal Palmer Lake’s reputation as a Christmas town.
According to the Palmer Lake Profile – 1920 to 1972 portion of the updated Marion Savage Sabin’s book “Palmer Lake: A Historical Narrative,” the Depression brought many hardships, the W.P.A., and little growth to Palmer Lake. But it also brought us the Yule Log celebration.
“An old English custom was adopted in 1934 which has far-reaching effect on the town and its residents,” the book holds. “At the suggestion of Miss Lucretia Vaile, Miss (Evalena) Macy and the young people of the church (Little Log Church) sent for a splinter of the Lake Placid Yule Log in New York and organized the first Palmer Lake Yule Log ceremony.”
The event was held in the Charley Orr-Dr. E.M. Spaulding home and fifty people wearing red or green capes, went on the hunt in Sherwin Canyon. The first Yule Log was discovered by C.R. Hays, principal of the elementary school.
In 1935, the ceremony became a community project and as crowds grew, it was moved to the Town Hall in 1937 and has been there since.
“Every year except in World War II, this heart warming, free ceremony has occurred on a Sunday before Christmas. Hundreds of Yule Log splinters have been sent to communities to start other ceremonies,” says Sabin’s book.
"It started because Lucretia thought it would be a fun thing to do here," Susan Davis, curator of the Lucretia Vaile Museum in Palmer Lake at the time, was quoted in a Gazette story by Linda DeVal in 2001.
In the same story, Virgil Watkins, then president of the Palmer Lake Historical Society, said Vaile participated in the early festivals, and "she even got us a sliver of the Yule Log from Lake Placid (N.Y.) to start our first fire."
A perennial  president of the celebration, Kurt Voelker, said several years ago, he usually expects from 200 to 450 people. “It depends on the weather and what football games are on.”
The Yule Log Celebration itself, begins at 1 p.m. on a Sunday before Christmas at the Town Hall.
Wearing red and green capes, every year the crowd searches for the log with a notch on the end and a red ribbon. “It is eight to twelve inches in diameter and eight to twelve feet long and is cut on town property,” Voelker said.
Voelker said entertainment has usually been lined up and provided while the search is underway. “Nothing too fancy, but it all is very nice.”
How much entertainment?
“It depends on how long it takes to find the log, it has been found in few minutes before, and sometimes it takes much longer,” he said.
Part of the log is then burned in a townhall ceremony in which people gather to drink wassail, carol and watch the Yule log burn. The event provides an excellent opportunity to take the edge off the hustle and bustle of a busy season, forget about tough times, and warm your heart in the spirit of the season.
###
Posted by ___ Restless Native at 4:02 PM