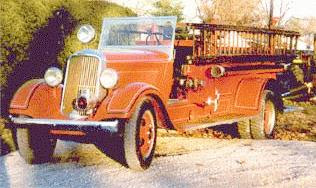 I wrote this story more than 24 years ago when I was still in J-school and working summers and holidays at Taylor Hardware in Dolores. It first appeared on the front page of the Dolores Star (edited at the time by Melinda and Sam Green) on August 2, 1984. Unfortunately, I can no longer put my hands on the photos that appeared with it. The above model is similar, minus the brass rail where this one has a windshield and pump connections and gauges on the front. If anyone has a shot of the Dolores Old ’34 Dodge, please send me one.

Even though they had a debt for one bottle of whiskey and no assets, the Dolores Fire Department began planning to buy their first fire truck more than 50 years ago.
The department, which had been Dolores Hose Company #1, was forced to reorganize and would years later become Dolores Fireman, Inc. A winter fire, early in 1934, left virtually all of Hose Company #1’s equipment, including the hand-drawn or horse-dawn hose cart, useless because of frozen hoses, said Merton Taylor, a long-time Dolores fireman.
The fireman had charged a couple of bottles of whiskey to help fight cold during the fire, Taylor said. After the fire, they returned one of the bottles, leaving them with a debt for the other bottle and a bunch of useless equipment. The town was left with very high fire insurance rates.
The Dolores Town Board decided on July 15, 1934, to buy the best new fire truck available, even though it was expected to cost as much as $1,400 for the chassis and about the same for the body. The money came from the town itself and from donations from local businessmen.
The truck, purchased through the local Dodge dealer, Musgrave and Calhoun, and constructed by W.S. Darley of Chicago, arrived in Dolores in late October, 1934.
M.A. Plumlee, his wife Helen, and their daughter Ramona(now Becher) who was not quite four years old at that time, had ridden the train back to Chicago, picked up the truck, and had driven it back.
The truck had an open cab but a canvas cab was built for the trip home.
“It was a little cold,” said Helen Plumlee, “and Morey (M.A) had a sore throat afterwards, but we made it.”
Mrs. Plumlee said the train trip to Chicago took two days and they had to wait there for nearly a month for the truck to be completed. They took in the World’s Fair while they waited, she said.
The truck was “absolutely the latest thing in that class of equipment” and “one of the finest pieces of firefighting apparatus of any of the towns in the Basin,” according to the Dolores Star at the time.
The truck had a ton and a half Dodge chassis and a pumper that could pump 650 gallons a minute and 300 pounds per square inch. It also had a 300-gallon storage tank.
The Dolores Star of October 26, 1934, said, “Mr. Plumlee said the new truck attracted a great deal of attention in the cities and towns he drove through between here and Chicago. In some places, the police and wouldn’t let him go until their firemen had a chance to examine the new truck.”
The truck provided fire service a number of years for the town and then was sold to Pleasant View Fire Department in 1954 for about $1,000. Pleasant View used the truck for a while, then sold it back to Dolores in 1960 for $325. Dolores has used it in parades and conventions since then.
A year and a half ago, David Doudy, captain of the fire department now, and other members of the department, began restoring the truck back to its appearance when it first arrived in Dolores. They used a picture that belonged to Ramona Becher to make the truck as close as possible to the original.
Doudy said he personally had about 450 hours of work in the truck and that other members also worked a lot on the truck.
Doudy estimated the restoration project was worth about $3,000 to $10,000. The department spent nearly $2,500 on materials, Doudy said.
The truck will be used for show only, but it is in working order. It has already won a second place in the Ute Mountain Rodeo Parade in the antique car class since it was completed earlier this summer, and the department plans to take it to other shows, Doudy said. The truck will definitely be in Mancos this weekend for the Tri-State Convention there. And it will make its first appearance in restored condition at Dolores’ own Escalante Day parade Aug. 11, looking much as it did when it was first welcomed by the community 50 years ago. 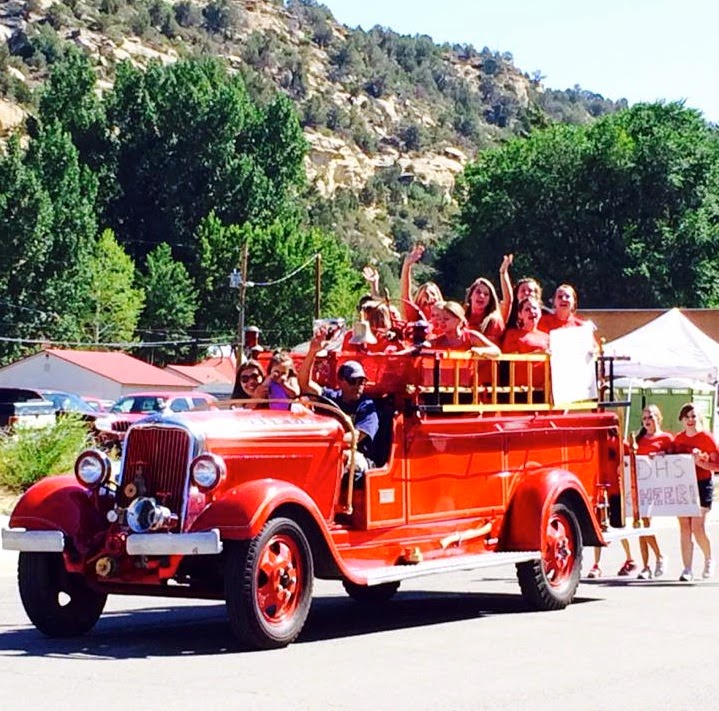