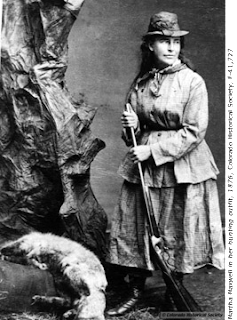 “Historians relate not so much what is done as what they would have believed.” __ Ben Franklin, 1743

I was reminded recently that one must be careful in considering history. It often depends on who wrote it. Traditionally dominated by white men in the winner’s circle, their fantastic adventures, war stories and “important” achievements take on nuances that cast their kind in favorable or at least forgiving, light.
Their kind is my kind. Maybe that explains my predisposition to consume and my historic inclinations. But, in the interest of equal time, or at least a feeble attempt to acknowledge others might have had a role in what came before, I discuss today one of my young daughter’s heroes.
Martha Maxwell, a self-educated naturalist and artist, first came to Colorado during Pikes Peak Gold Rush in 1860 with her husband, a Pennsylvanian coal miner. Reportedly, her childhood affinity for animals developed into a taxidermy hobby and eventually an all-consuming nature study .
“In an effort to preserve a record Colorado’s wildlife, Maxwell created dynamic displays of wild animals.” notes Women of the West Museum. “ She single-handedly mounted and arranged them in detailed realistic habitats. In 1876, she exhibited one such diorama at the Philadelphia Centennial under the title ‘Women’s Work.’”
Maxwell dedicated her life to taxidermy and considered it “as a fine art, subservient to science.”
According to Bios In History, Maxwell was the first woman to collect and prepare her own skins and mounts. “She spent nearly eight continuous years in the field in the Rocky Mountains, documenting the presence of species previously not known to live here.”
Much of her camping and hunting for unique animals took place in the mountains around Boulder and many of her diorama display techniques are still used in museums today.
For these notable contributions, the respected ornithologist Robert Ridgeway named a new variety of screech owl (some accounts say she discovered the first one) Scops asio maxwelliae or Mrs. Maxwell’s owl after her. She is the first woman to have a subspecies named after her.
“To a naturalist, intent upon knowing the secrets of the natural world, the capture of the smallest bud or insect gives as much pleasure as to have outwitted and slain the fiercest grizzly in the mountains or the largest buffalo on the plains,” wrote Maxwell in 1878.
That is different historic perspective than I’m used to. As I said, we must consider who has been writing all the history.
###
Posted by ___ Restless Native at 9:06 PM