High-graders resist everything but temptation

“But there are some things, child, that you should steal. That you must steal, if you have enough love and courage in your heart. You must snatch freedom from the hands of the tyrant. You must spirit away innocent lives before they are destroyed. You must hide secret and sacred places.” 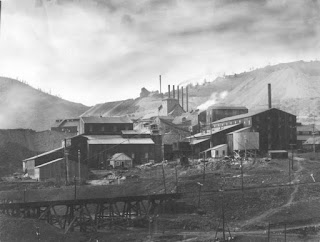 Independence Mine, near Victor, Colorado, about 1910. The railroad in the foreground is the Florence and Cripple Creek Railroad and the trestle crosses Wilson's Creek. Squaw Mountain to the left in background, Battle mountain to the right, and Ajax Mine in background. History Colorado, Denver Public Library.

In mining, high-grading refers to employees selectively harvesting and keeping only the most valuable material for themselves, rather than turning over that valuable property to to owner of the mine.  The term is frequently associated with fraud, but was a fairly common practice in very rich districts like Cripple Creek and Victor.

"So much 'blossom rock' was encountered in the workings that many miners were tempted beyond their strength and indulged in high-grading," wrote historian Lambert Florin in his 1970 book "Ghost Towns of the West."

"The practice became so general that a society for the purpose of protecting the miners involved was organized, the 'High-graders Association."

"Exchanges were organized for the purpose receiving the rich material, but internal disorders developed as miners accused operators of keeping more than share of the profits, and several offices were bombed," according to Florin. "At least one of the dynamitings was blamed on the mine owners who were understandably opposed to the whole thing."

"Overall losses from the practice of high grading were tremendous, one mine alone, the Independence, losing $1,000,000. Many measures for prevention were attempted, none being entirely effective. At the Independence the men were compelled to strip naked at the end of each shift and pass inspection. This stringent order was later rescinded and a milder one substituted — the men could keep their underwear on," said Florin.

In September 1900, the Independence mine was the first mine in the district to introduce a new stripping order requiring all underground workers to undress in one room of a change house and walk into another room in the nude while a guard observed. This was to take place at start and end of each shift. The new rule was implemented to prevent highgrading (theft of gold ore) by the mine workers.

Five hundred miners met at Victor's Armory Hall, and they decided that while they would help stop ore thieves, they refused to work under the stripping rule. A compromise was reached which allowed the miners to strip to their undergarments. But the miners were unhappy. After the new practice was in place for about a month, a Pinkerton guard searched the miners at the end of a shift. No ore was found, and the miners walked out.

Three days later, Independence mine manager A.H. Shipman met with the Western Federation of Miners (WFM) Executive Board. He ultimately agreed to abolish the Pinkerton guard system, to appoint a guard for the change rooms from candidates the union proposed, and to accept a closed shop. Under the agreement, any miner suspected of high-grading could be searched by a fellow union member in the presence of a watchman. Shipman also announced that he would support membership in the WFM by miners in return for the union's help in stopping the practice of high-grading. 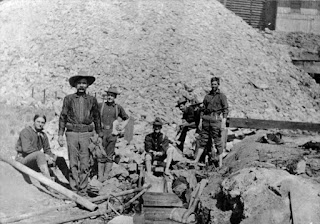 Colorado National Guard is posted in front of Winfield Scott Stratton's Independence Mine during the Western Federation of Miners strike in 1903, Cripple Creek, Teller County, Colorado. One man sits with his feet in the sluice; tailings in background.

Years later, local miner Edgar McGowan, noted in letter home that the practice persisted however. The letter was later published by the Victor Heritage Society.

"I wrote an article on high-grading and it was published in the Cripple Creek “GOLD RUSH” paper. Along in the early fifties, there was a barber in Victor, who had not been there very long before this article was published, and he did not believe it when he read it. He said to me, “Mac, how come you made up such a bunch of lies about high-grading? You don’t expect anybody to believe them, do you?” To which I replied, “Ask Mr. A.W.Oliver, who came to Victor in the early 1890’s and who had lived here ever since.” He did and Mr. Oliver told him every word I had written was true as could be, that he himself knew of the truth of what I had written."

Edgar McGowan's Memories of the Gold Rush Era in Victor were excerpted from a letter he wrote from Riverton, Wyoming on March 31, 1961 to his cousin, Addie. The letter was published by Victor Heritage Society and appears on their site. The letter and accompanying photographs were submitted in July 2016 by Nancy McGowan Galbraith (daughter of Edgar McGowan and Gertrude Moore) who resides in Virginia Beach, Virginia.

"There was a lot of “HIGH-GRADING” going on, up until about 1913. In case you do not know what “high grading” is, it was where the men who worked and even some of whom did not work, would steal some of the rich ore they mined and sell it to assayers for a small fraction of what it was worth. The men made big money out of the deals because the ore was so rich, running from a dollar to eighty dollars a pound. However, the assayers were the ones who made the most money," wrote Edgar McGowan.

"The biggest part of the high-grading took place prior to 1913. In that year the U.S. Government levied a production tax, similar to the income tax. It was one percent instead of the high levies we have to pay now. Many high-graders and assayers were arrested in the District, some of them being sent to a federal prison at Leavenworth, Kansas. That sort of stopped much of the hig-grading, but not all of it. A million dollars a year was being stolen in the Cripple Creek and Victor mines by high-graders and it no doubt was a good thing it finally was stopped."

"Now, let your mind go back to the “GOLD RUSH” days in the Cripple Creek-Victor District, say when I first hit there in 1907. Of course, the camp had reached its heyday some few years before that, but it still was a busy burg when I first saw it in December of 1907. I was entranced by it, for it was new to me. I felt exhilarated merely by looking at it, all covered with snow, and teeming with ever busy human beings." 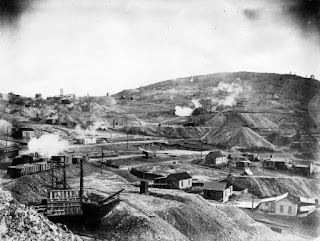 Independence (Teller County), Colorado. Shows mines (including the Delmonico), tailings, residences (including Jim Warford's), and Florence and Cripple Creek Railroad cars. In foreground is the foundation of the Golden Circle depot which was destroyed by a bombing in the labor wars.