Across the years from Poverty to riches 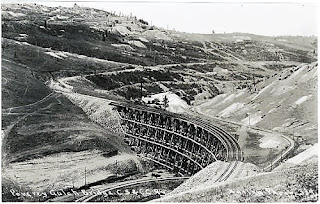 By Rob Carrigan, robcarrigan1@gmail.com
Legend has it that Bob Womack, following his cowboy hobby of prospecting on the side, found the first gold in the Cripple Creek district as early as 1874.  Promising rock sent it to Denver by Womack to be  assayed reportedly turned out to be worth $200 of gold per ton. He named the area where he found the rock Poverty Gulch. He spent the next 16 years before he found anything else of value.
Friends and acquaintance ribbed him about his "so-called gold mine," for years. Though he did not profit as handsomely as others in the district, he did however, manage to secure the option of saying, "I told you so."
Later, in the heydays of the district, the timber trestle across Poverty Gulch on Colorado Springs and Cripple Creek District Railway was 400 feet long and 70 feet high, the largest on the line. The bridge was located east of the town of Cripple Creek and was integral to completing a rail line in 1901 providing a direct rail line to Colorado Springs traversing the south slope of Pikes Peak.
This allowed freight trains to carry ore for delivery to reduction mills, such as the Golden Cycle, Standard, Telluride, and Portland located on the western edge of Colorado Springs.
To the right and running along a hillside below the bridge another rail line can be seen with overhead catenary lines to provide power to the electric trams using this system. A large mining facility can be seen on the hillside above the bridge.
Hand-printed on bottom of print "Poverty Gulch Bridge. C.S.&C.C.Ry." and "Harlan Photo. 339."
Posted by ___ Restless Native at 6:40 AM