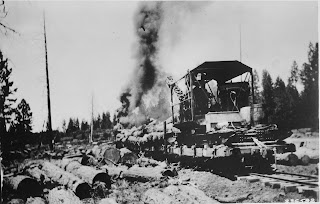 It was a bit of a mad scramble to dig out, log off, and uncover things that had been gone, and almost forgotten for years, back in the early 1980s ... a race to to beat the dam water of McPhee Reservoir. What had been one the biggest towns and largest industry was soon to be underwater.

"The company town of McPhee, Colorado, owned and operated by the New Mexico Lumber Company, lasted from 1924-1948, serving as an important economic and cultural town of the Dolores River Valley. During the industrial town's peak of operations in 1927, it was Colorado's largest and most productive mill town, producing more than half the State's annual lumber. The town featured a lumber mill, housing for approximately 1,500 employees and the last logging railroad in Southwestern Colorado," says historian Lisa Mausolf, in her field notes at the Library of Congress, August, in 1981.

At the turn of the century, after the Rio Grande Southern Railroad arrived in the area and Edgar Biggs of the New Mexico Lumber Company began buying up cutting rights to newly accessible timber that now could be shipped somewhere, it was only a matter of time before all ‘woodcutting hell’ broke out in the forests north of Dolores.

“Biggs hired Arthur Ridgway to survey the region for its timber potential. Ridgway’s report estimated that 210 square miles or 134,400 acres of prime western yellow pine were available in the area. He proposed that Biggs construct a sixty-five mile logging railroad with which to harvest close to 135,000 narrow gauge carloads of lumber,” according Frontiers in Transition: A history of Southwestern Colorado. The book was developed for Bureau of Land Management’s Cultural Resource Series and written by Paul M. O’Rourke in 1980.

Biggs, who had worked with C.D. McPhee and J.J. McGinnity of the New Mexico Lumber Company at operations in Pagosa Springs and Lumberton, New Mexico, had planned to harvest the timber north of Dolores without the new Mexico Lumber Company backing. “McPhee caught wind of Biggs plan however, and purchased the Denver-based lumber company which Biggs had hoped would finance the operation. Although Biggs remained affiliated with New Mexico Lumber until 1917, McPhee and McGinnity, after their coup of 1907, took charge of operations in the Dolores River Valley.”
Lumber wood produced at McPhee was rough-cut, finished later at the McPhee and McGinnity plant in
Denver, located at Blake and 23rd Street. 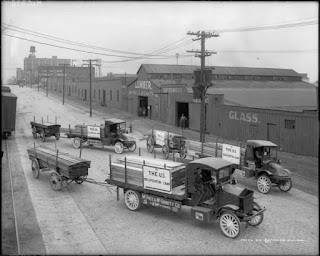 The lower grades of lumber were made into railroad ties, to satisfy contract with the Denver and Rio Grande Western Railroad. This contract enabled the lumber company to survive the Great Depression.Other lumber from McPhee was utilized for a variety of purposes and reached many destinations.

"Superior lumber grades were used for building construction and were also shipped to sash and door factories along the Missouri River. Additionally, contracts, including one for lumber to build local Civilian Conservation Camps in 1933 and another to manufacture army locker trunk trays during world War II, The McPhees pioneered logging railroads. Their decision to use the logging railroad in this area was a response to the type of lumber which they sought," says Mausolf, in her field notes. 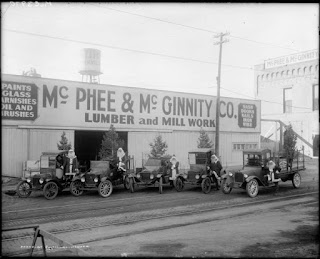 Unlike species like cottonwoods which thrive in river bottoms and can be cut, dumped into a river and floated, the tall Ponderosa pines require dry and well drained soil, normally found on mesas away from river bottoms. Land transportation either utilizing horses or logging railroads was, therefore, the only alternative.

The McPhee railroad was the last narrow gauge logging railroad in southwestern Colorado. The railroad officially came to the Dolores River Valley in 1891, in the form of the Rio Grande Southern. Due to McPhee's relative isolation, the New Mexico Lumber Company decided to link the mill town with the main line railroad as well as construct track or each into the timberlands.

The participation of a mainline railroad in the operation of logging lines was unprecedented in the United States Railroad construction began in 1924, using an incomplete survey commissioned for the Dolores, Paradox and Grand Junction Railroad in 1913.  In 1924, a line was built westward five miles from Dolores, terminating at McPhee. Many logging lines of the region, Colorado and Southwestern, as the McPhee's line was named, were formally incorporated rather than operating under the lumber company name. 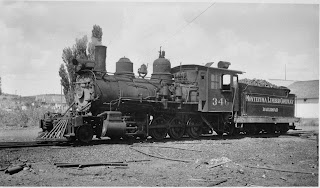 As logging operations moved deeper into the timber, railroad spur lines followed. At its peak the company amassed sixty miles of railroad. The New Mexico Lumber Company had five logging locomotives, one geared and four rod. The rod locomotives were mostly obsolete, obtained second-hand from the Denver and Rio Grande Railroad with one from Rio Grande and Southwestern Railroad at El Vado.

"The Montezuma Lumber Company, which took over in 1936, decreased the trackage substantially and reduced the locomotives to two. Most of the 45 flat cars came from nearby declining operations• Second hand track was imported from Salida and Pagosa Springs.
In the 1930s, the Montezuma Lumber Company purchased an 1880 duckbill coach (#311) from the Denver and Rio Grande Western Railroad to transport employees and their families to Dolores behind the regular lumber train. On Saturday nights the train transported the townspeople to Dolores for dances, movies and drinking in the gas-illuminated car with faded red plush seats.," says Mausolf, in her field notes.
"The end of narrow gauge logging in southwest Colorado came in 1932 when the expense of hauling lumber by rail gave way to hauling by trucks. The five miles of track between McPhee and Dolores remained, however, and continued to service McPhee residents. The scrapping of the last of this segment occurred in 1948, after an intense struggle and a brief period of receivership in the 1940's the Denver and Rio Grande Southern Railroad abandoned operations in the area," she wrote. 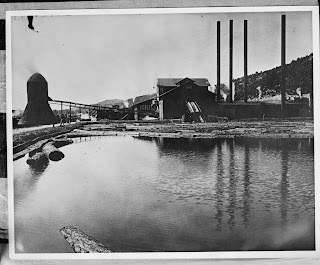 "The logging operations at McPhee have been criticized for their continued dependence on the railroad and failure to mechanize production. Logging in Colorado as exemplified by McPhee was marked by the absence of mechanical loading devices used on the Pacific Coast. It represented instead a marked dedication to horsepower. Four-horse teams, with either big wheeled rigs or eight wheeled wagons were used to haul the trees to the loading station. Instead of steam donkey engines, Colorado loggers used cross-hauling, by which a team of horses dragged trees up a ramp onto log cars. Seven to ten flat cars made up a train with two locomotives used to haul from forest to mill," according to Mausolf, in her field notes.

A locomotive hauled the loaded cars to the unloading skids at the mill pond. It is interesting to note that most of the hay and grain for the 200-250 heavy draft horses had to be shipped in as no local 50^nj£g£mi^d by the sales agency could regularly meet the demand. 50 Social communities, separate from that of the company town of McPhee, sprang up as new logging camps were established. he sites of the camps moved every few years as logging operations ventured deeper to secure timber. The earliest, Horse Camp, was little more than a construction camp, though it did have a school. Beaver Camp in 1925 represented a more permanent encampment, with a store and post office.

From then on, a small commissary was always moved along with the camp. Lawrence Sullenberger did most of the construction work and establishing of camps for the New Mexico Lumber Company. Small board cabins were built on skids, easily hitched to four or six horses for transportation to new sites. Tent colonies were often constructed at the camps. Entire families often moved to the hills so the head of family could earn a living. Characteristically the camp housed several hundred loggers and their families. No rent was charged in the log camps. During the winter people from the logging camps resided in McPhee, reported Mausolf. 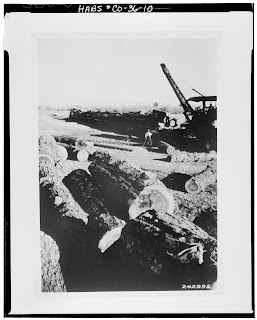 “The town of McPhee was only part of the company’s expansive lumber monopoly,” writesMausolf in her book The River of Sorrows: The History of the Lower Dolores River Valley. “During its peak in 1927 McPhee and McGinnity had five lumberyards in Denver, five in San Luis Valley and five on Moffat Road with 25 branches in Colorado, Nebraska and Wyoming.”
The company originally looked at placing the mill in or near the town of Dolores but local opposition forced them to look elsewhere. That is how they arrived at the 800-acre site of the old Charlie Johnson homestead.
“The town site was originally known as Ventura. It was also temporarily called Escalante. McPhee was situated on the alleged spot where in 1776 Father (Silvestre Velez de) Escalante stopped for several weeks beside a stream he called the Dolores River. The town was given its final name after an influential visit to the site by William McPhee in 1924,” wrote Mausolf.
By 1925, the mill at McPhee was producing 61 percent of all lumber in the entire state, more than 27,445.360 board feet. The mill itself covered a city block with a three-story main building, three-acre pond planing mill and box factory. 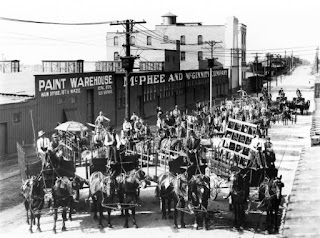