“All autumn, the chafe and jar of nuclear war;
we have talked our extinction to death.
I swim like a minnow behind my studio window.”
― Robert Lowell, For the Union Dead 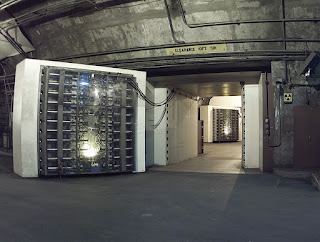 Safe inside the mountain

When I was in high school in southwestern Colorado in the 1980s, conventional wisdom (as much as our small minds had access to) suggested that because the North American Air Defense Command system was headquartered in Colorado Springs, it was considered a likely nuke target. Though several mountain ranges separated us, we still postulated that we were way too close — being in the same state and all.

The North American Air Defense Command (NORAD) was established and activated at Ent Air Force Base in Colorado Springs on September 12, 1957. The bi-national command of Canadian and United States Air Defense units, in accordance with NORAD Agreements first made on May 12, 1958, was a plan developed to construct a command and control center in a hardened facility as a Cold War defensive strategy against long-range Soviet bombers, ballistic missiles, and a nuclear attack.

In 1957 the Strategic Air Command began construction in New England inside Bare Mountain for a hardened bunker to contain the command post for the 8th Air Force, which was located at nearby Westover Air Force Base, Chicopee, Massachusetts. This underground facility was nicknamed "The Notch" (or formally as the 8th AF "Post-Attack Command and Control System Facility, Hadley") and was hardened to protect it from the effects of a nearby nuclear blast and designed so that the senior military staff could facilitate further military operations. 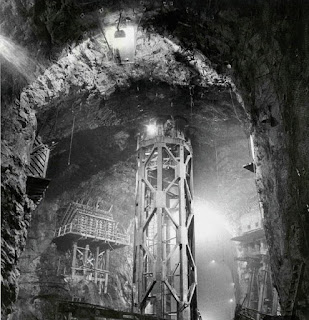 Contruction of NORAD in Cheyenne Mountain.

According to locals from the Pikes Peak area, much of the blasting work was done by miners from the Cripple Creek District, says longtime area historian Ray Drake. "When the Golden Cycle closed the Ajax in 1962, the miners carpooled and were employed at NORAD," notes another local Tish Allen. "They were glad to get the work and the government was happy to get experienced underground workers."

The Space Defense Center and the Combat Operations Center achieved full operational capability on February 6, 1967. The total cost was $142.4 million. Its systems included a command and control system developed by Burroughs Corporation. The electronics and communications system centralized and automated the instantaneous (one-millionth of a second) evaluation of aerospace surveillance data.[The Space Defense Center moved from Ent AFB to the complex in 1965.The NORAD Combat Operations Center was fully operational April 20, 1966. The Space Defense Command's 1st Aerospace Control Squadron moved to Cheyenne Mountain then. The following systems or commands became operational between May and October, 1966: The NORAD Attack Warning System, Combat Operations Command,and Delta I computer system, which recorded and monitored every detected space system.

"With the beginning of the Cold War, American defense experts and political leaders began planning and implementing a defensive air shield, which they believed was necessary to defend against a possible attack by long-range, manned Soviet bombers. By the time of its creation in 1947, as a separate service, it was widely acknowledged the Air Force would be the center point of this defensive effort. Under the auspices of the Air Defense Command (ADC), first created in 1948, and reconstituted in 1951 at Ent AFB, Colorado, subordinate Air Force commands were given responsibility to protect the various regions of the United States. By 1954, as concerns about Soviet capabilities became more grave, a multi-service unified command was created, involving Naval, Army, and Air Force units—the Continental Air Defense Command (CONAD). Air Force leaders, most notably Generals Benjamin Chidlaw and Earle Partridge, guided the planning and programs during the mid 1950s. The Air Force provided the interceptor aircraft and planned the upgrades needed over the years. The Air Force also developed and operated the extensive early warning radar sites and systems which acted as “trip wire” against air attack. The advance warning systems and communication requirements to provide the alert time needed, as well as command and control of forces, became primarily an Air Force contribution, a trend which continued into the future as the nation’s aerospace defense matured,"wrote General Charles H. Jacoby, Jr., Commander, North American Aerospace Defense Command, August 3, 2011, in "A Brief history of NORAD."

"As Air Force leaders developed plans and proposed warning system programs, they became convinced of the logical need for extended cooperation with America’s continental neighbor, Canada. US-Canada defense relationships extended back to World War II when the two nation’s leaders formally agreed on military cooperation as early as 1940, the Ogdensburg Declaration. These ties were renewed in the late 1940s with further sharing of defense plans in light of increasing Soviet military capabilities and a growing trend of unstable international events, such as the emergence of a divided Europe and the Korean War," said Jacoby.

"Defense agreements between Canada and the United Stated in the early 1950s centered on the building of radar networks across the territory of Canada—the Mid- Canada Line (also known as the McGill Fence), the Pinetree Line, and the famous Dew Line. This cooperation led to a natural extension of talks regarding the possible integration and execution of air defense plans. The RCAF and USAF exchanged liaison officers and met at key conferences to discuss the potential of a shared air defense organization. By 1957, the details had been worked out and the top defense officials in each nation approved the formation of the North American Air Defense Command, which was stood up on 12 September at Ent AFB, in Colorado Springs, Colorado, home of the US Continental Air Defense Command and its subordinates, including USAF Air Defense Command. General Earl Partridge, USAF, who was both the ADC and CONAD Commander, also became commander of NORAD, and the senior Canadian RCAF official, Air Marshal Roy Slemon, who had been the key Canadian delegate in most of the cooperation talks, became deputy commander, NORAD. Nine months after operational establishment of the command, on 12 May 1958, the two nations announced they had formalized the cooperative air defense arrangements as a government-to-government bilateral defense agreement that became known as the NORAD Agreement. The NORAD Agreement and its associated terms of reference provided the political connections which would make possible the longevity of the Canadian-US aerospace defense relationship into the future years."

Another example of NORAD’s continuing adaptability also came in 2006. In NORAD’s fifty-year history, perhaps the most notable symbol of the command has been the Cheyenne Mountain Operations Center (CMOC), often referred to as simply “Cheyenne Mountain.” This vast bunker complex, which became fully operational in 1966, sat more than 1500 feet underground and consisted of fifteen buildings which comprised the central collection and coordination facility for NORAD’s global-sensor systems. In early 2006, after studies and reviews, the NORAD and USNORTHCOM commander, decided, because of the changing nature of the threat in a post-9/11 world and because of gained efficiencies in monitoring the warning networks, the CMOC surveillance and warning of attack command centers could be relocated into a dual- purpose command center located at NORAD and USNORTHCOM headquarters on Peterson AFB. Cheyenne Mountain would become an alternate command center rather than be maintained on a 24/7 basis. The NORAD and USNORTHCOM Command Center at Peterson would become the official surveillance center for both commands, designed to give the commander and the Canadian and US leadership an accurate picture of any aerospace and other domain homeland threat."


"As NORAD reached its fiftieth year, most believed the command was on sound footing. The 2006 NORAD Agreement renewal expanded the mission to include a non-aerospace responsibility—maritime warning—and removed the normal practice of a five-year expiration date for the agreement. Instead, the two nations would merely review the nature of the accord for potential changes. In 2008 the command celebrated its fiftieth anniversary, unveiling the new NORAD and USNORTHCOM Command Center (N2C2). In a stellar example of governmental, military, and law enforcement cooperation, NORAD provided air security assistance to the Government of Canada for the 2010 Vancouver Winter Olympics." 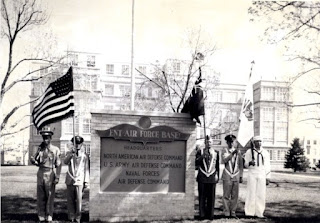 In 2011 and 2012, the mutual cooperation continued in the form of numerous exercises and real world events. In October of 2012 the NORAD and USNORTHCOM headquarters building at Peterson Air Force Base was renamed the Eberhart-Findley Building in honor of U.S. Air Force General (Ret.) Ralph E. Eberhart and Royal Canadian Air Force Lieutenant-General (Ret.) Eric A. Findley. This is the first time the name of a U.S. military combatant command headquarters included a Canadian military officer’s name. In December Army Gen. Charles Jacoby, Jr., commander of NORAD and U.S. Northern Command, and Lt.-Gen. Stuart Beare, Canadian Joint Operations Command commander, signed the Tri Command Framework for Arctic Cooperation and the Tri-Command Training and Exercise Statement of Intent – during the 230th meeting of the Canada-U.S. Permanent Joint Board on Defense in Colorado Springs, Colo continuing the mutually beneficial relationship of defense to the homeland.

In 2013, the command, looking to the future and at the same time responding to decades old threats made new,  developed the concept of “NORAD Next” as a way to ensure meeting and outpace emerging threats in all domains. The current NORAD agreement needed to “continue to adapt to future shared security interests to ensure that heir respective and mutual defense requirements are met in the current and projected geostrategic circumstances.”

NORAD Next became the modernization efforts inside the command towards 2025-2030. At the same time, NORAD launched fighters, AWACS, and tankers from the Alaskan and Canadian NORAD Regions in response to a renewed Russian Long-Range Aviation. These sorties, were not identified on international flight plans and penetrated the North American Air Defense Identification Zone. Detect and intercept operations demonstrated the ability and intent to defend the northern reaches of the homeland and contributed to the strategic deterrence of aerospace threats.