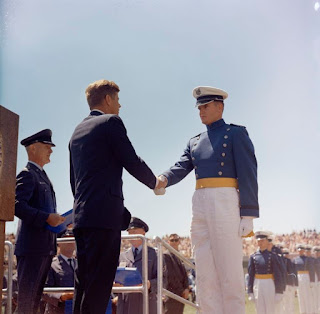 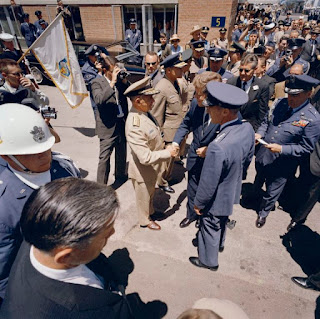 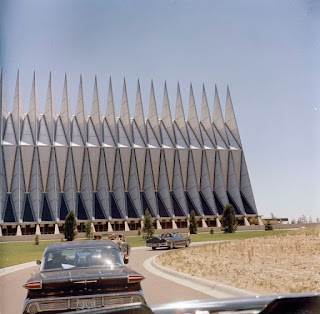 Kennedy's presidential motorcade near the Chapel at Air Force Academy.

Presidential connections to the Centennial state

Presidents of the United States have traditionally enjoyed trips to Colorado. It has often been considered friendly territory.  After all, Washington is a tough town at the top. Consider what former president Harry Truman is credited with having said about the nation's capital. "If you want a friend in Washington, get a dog."

Probably the first president to visit the state was Ulysses S. Grant, as he was president at the time it became a state in 1876.

Grant visited the Colorado Territory in late April 1873, having traveled by the Union Pacific Railroad, who had made a special presidential car. President Grant stayed at the residence of Governor Samuel H. Elbert, whom Grant had appointed earlier in April. Grant's presidential party included his wife, daughter Nellie, and his private secretary Orville E. Babcock. At a reception held by Governor Elbert at Guard Hall, Grant was met by many white people who aggressively sought his handshake. Grant met with 30 to 40 Ute Indians, who had desired to see the "Great Father", and shook their hands. Former Colorado Territory Governors John Evans and Edward M. McCook also met with Grant while he visited the Colorado Territory. President Grant was impressed by Colorado's "magnificent scenery" and expressed his desire to revisit the territory.

Many presidents that followed also had, or developed, connections to Colorado. 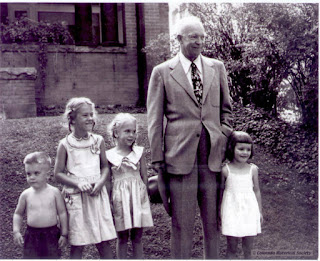 Dwight Eisenhower married Mamie Doud who grew up in Colorado. They were married in Denver in summer of 1916, and later visited periodically.

On September 24, 1955, while vacationing in Colorado, he had a serious heart attack. Dr. Howard Snyder, his personal physician, misdiagnosed the symptoms as indigestion, and failed to call in the help that was urgently needed. Snyder later falsified his own records to cover his blunder and to protect Eisenhower's need to portray he was healthy enough to do his job.

The heart attack required six weeks' hospitalization, during which time Nixon, Dulles, and Sherman Adams assumed administrative duties and provided communication with the President. He was treated by Dr. Paul Dudley White, a cardiologist with a national reputation, who regularly informed the press of the President's progress. Instead of eliminating him as a candidate for a second term as president, his physician recommended a second term as essential to his recovery. 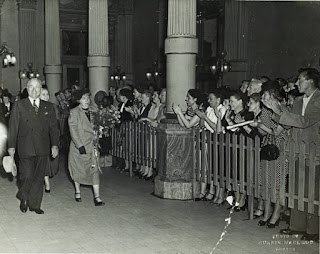 Harry Truman also had connections to the state and at one time, and is said to have considered establishing a sort of "summer White House" here. His long-time press secretary was from Victor, Colorado.

On Dec. 5, 1950, Charles G. Ross died of a heart attack at his desk in the White House, moments after concluding the afternoon radio and press conference for Harry S. Truman. Ross served as press secretary to the president from 1945 until his death.

In early June of 1963, President John F. Kennedy embarked on a whirlwind tour through several locations in the Southwestern United States. Over the course of five days, from June 5 to June 9, he visited Colorado, New Mexico, Texas, California, and Hawaii. All White House Photographs documenting this trip – more than 250 – are now digitized in full and are accessible online through the John F. Kennedy Presidential Library and Museum’s digital archives.

"President Kennedy’s activities during this trip were varied—and hurried. After departing from Washington, D.C., around 9:30 a.m. on June 5, the President landed in Colorado Springs, Colorado—where it was still morning, in Mountain Time. He delivered the commencement address at the United States Air Force (USAF) Academy and toured the school’s campus, before making a brief stop at the headquarters of the North American Air Defense Command (NORAD)," according to information from the library. 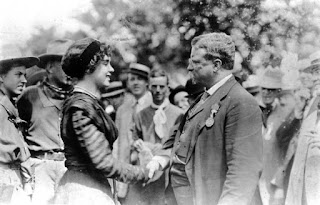 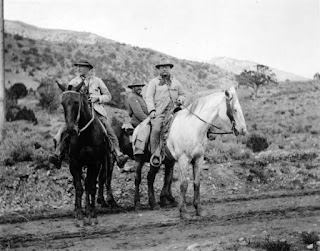 President Roosevelt, with his guide, Henry Bunn, Sr. near Glenwood Springs during a bear hunt in 1905.

Theodore Roosevelt was a frequent Colorado visitor and on at least two extended hunting trips on the Western Slope for bear and mountain lions, managed to become the inspiration for "Teddy Bear."

He also befriended a Colorado rat terrier dog named "Skip" and returned to Washington to where Skip became one of the family and a mainstay at the White House. 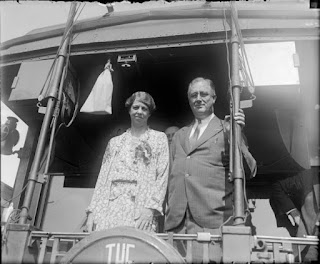 FDR and his wife Elanor pose on a train near Denver in 1936. 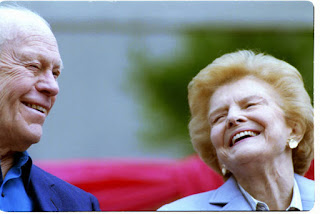 President Gerald Ford and his wife Betty share a lighthearted moment at Raze the Roof ceremony in Vail for the amphitheatre that bears his name. 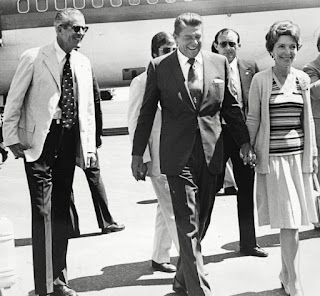 July 10, 1976, President Ronald Reagan walks with his wife Nancy and supporter Joe Coors and Stapelton International Airport. They were headed to Fort Collins to the Colorado GOP convention. 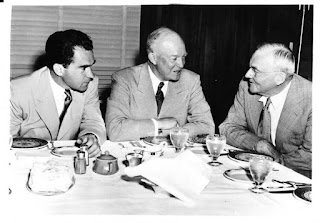 Richard Nixon, "Ike," and John Foster Dulles at a meeting at the Brown Palace in Denver Aug. 8, 1952. 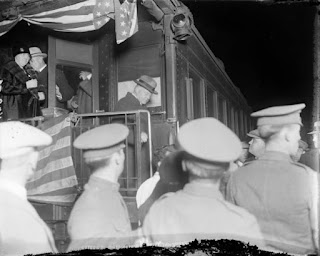 President Herbert Hoover steps off a train at Union Station in Denver. 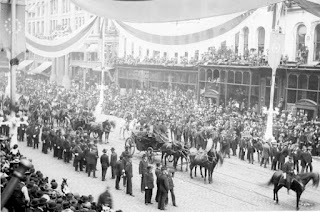 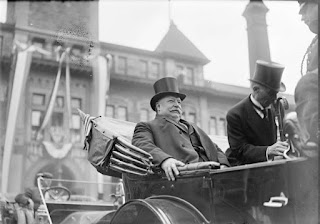 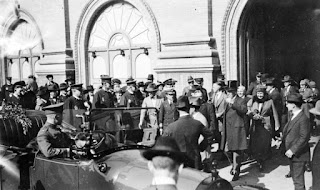 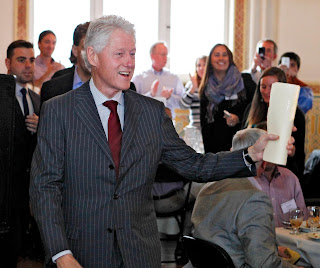 Bill Clinton in a surprise visit to local activists in Denver. 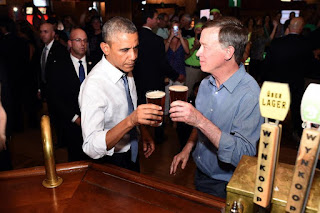 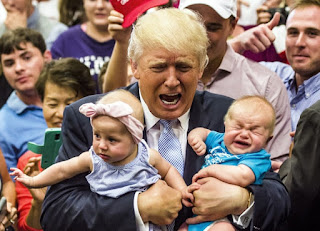 Donald Trump on a campaign trip to Colorado. 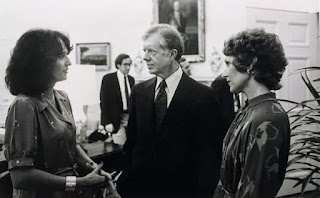 Jimmy Carter, Joan Baez, and others meet during an event at University of Colorado, in Boulder. 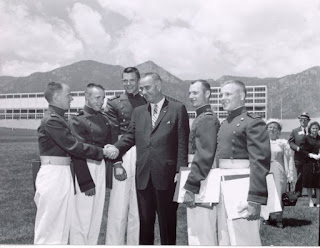 Lyndon Johnson meets with recent graduates at the Academy, near Colorado Springs. 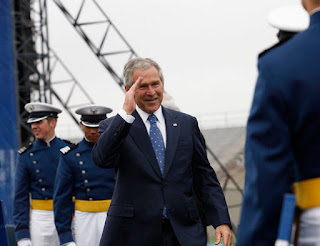 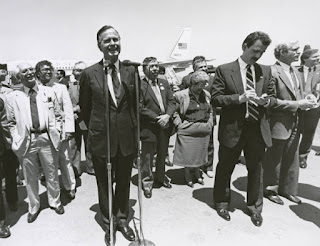 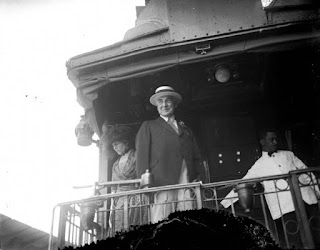 United States President Warren G. Harding poses with a woman and a Black man in porter uniform, on the observation deck of a railroad passenger coach, Denver, Colorado.

Really Good tips and advises you have just shared. Thank you so much for taking the time to share such a piece of nice information. Looking forward for more views and ideas, Keep up the good work! Car service from Denver airport to vail