Dolores connection to the movie industry? 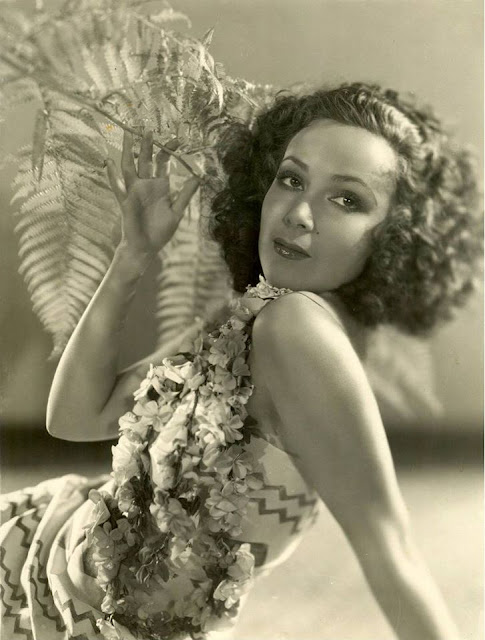 Still looking for a Dolores Star

By Rob Carrigan, robcarrigan1@gmail.com
For years now, I have been wondering if there was any kind of connection to Del Rio Hotel in Dolores, Colorado, and the early film industry. I have heard of visits there by Clara Bow and perhaps others, but was also intrigued by the name itself, as Dolores Del Rio was one of the top starlets of the 1920s.
Dolores del Río (Spanish pronunciation: [doˈloɾez ðel ˈrio]; born María de los Dolores Asúnsolo López-Negrete; August 3, 1904 – April 11, 1983) was a Mexican actress who was the first major female Latin American crossover star in Hollywood, (with a career in American films in the 1920s and 1930s. She was also considered one of the more important female figures of the Golden Age of Mexican cinema in the 1940s and 1950s. Del Río is remembered as one of the most beautiful faces of the cinema in her time. Her long and varied career, nearly 50 years, spanned silent film, sound film, television, stage and radio.
With director John Ford doing a lot of work in Monument Valley in the 1930s and other possible connections of the film industry, I've always speculated that some sort of link was possible.
A long time ago, I asked longtime Dolores resident Mary Ann Findley and relative of hotel builder Billie Brumley, if the family knew of any connection.
"Do you know if there was any sort of hook from Billie Brumley lore to the film industry? Thanks for any help, or pointing me in the right direction."
"Oh Rob, how I wish my Dad were still alive. I know they made a movie in the area in the 20's. I'm sure you have seen the old newspaper stories on that. I have no idea why Uncle Billie named it the Del Rio. It could have had something to do with that. I know he traveled a lot to California in those days and may have been intrigued with the film industry. He was quite a businessman," Findley said.
The record provides, that while visiting the set of The Searchers in Monument Valley later, Dolores Del Rio has lunch with John Wayne and director John Ford in 1956. 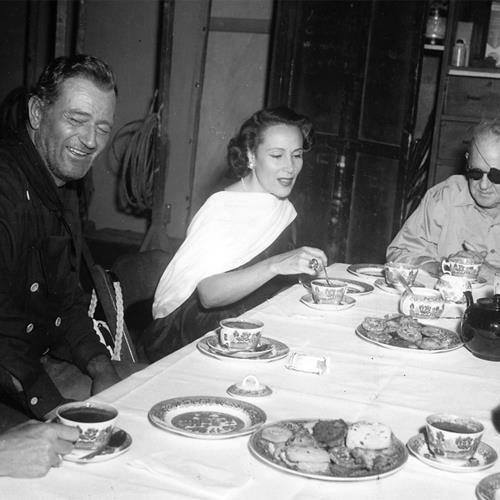 The Duke made five movies in Monument Valley in his lifetime, “Stagecoach” (1939), “Fort Apache” (1948), “She Wore a Yellow Ribbon” (1949), “Rio Grande” (1950), and “The Searchers” (1956). In 1921, Harry Goulding and his young bride Leone (nicknamed Mike) purchased 640 acres next to Monument Valley. They spent their first years trading with the Navajo people out of their tent.
In 1928, the Gouldings completed construction of an old stone trading post with an apartment in the upstairs. The building has been converted over to a museum where you can see photographs and memorabilia during the Gouldings stay. In this photo, John Wayne and John Ford share a meal there with actress Dolores Del Rio at Gouldings.

In late 1928, Hollywood was concerned with the conversion to sound films. On 29 March, at Mary Pickford's bungalow, United Artists brought together Pickford, del Río, Douglas Fairbanks, Charlie Chaplin, Norma Talmadge, Gloria Swanson, John Barrymore, and D.W. Griffith to speak on the radio show The Dodge Brothers Hour to prove they could meet the challenge of talking movies. Del Río surprised the audience by singing "Ramona" proving to be an actress with skills for sound cinema.

Fairbanks, "The King of Hollywood," of course, learned the trade in Denver.
Silent film star Douglas Fairbanks began acting at an early age, in amateur theatre in Denver, performing in summer stock at the Elitch Gardens Theatre, and other productions sponsored by Margaret Fealy, who ran an acting school for young people in Denver, at the time.
Though he started high school at Denver East High School, he was expelled for cutting the wires on the school piano.

Though widely considered as one of the biggest stars in Hollywood during the 1910s and1920s, Fairbanks' career rapidly declined with the advent of the "talkies."
"Swashbuckled in Zorro, duelled exuberantly in Robin Hood, and soared magnificently in The Thief of Bagdad, " wrote Pamela Hutchinson recently for The Guardian, he often described as one of Hollywood’s founding fathers. In 1919, together with his best friend Charlie Chaplin, his bride-to-be Mary Pickford, and director D.W. Griffith, he started the United Artists studio, which is still, despite some recent uncertainties, a Hollywood player.

Dolores Del Río was also considered one of the more important female figures of the Golden Age of Mexican cinema in the 1940s and 1950s. Del Río is remembered as one of the most beautiful faces of the cinema in her time. Her long and varied career (over 50 years) spanned silent film, sound film, television, stage and radio.

According to the stories, and personal knowledge of the building as a kid growing up in Dolores, the big hotel included a ballroom and large restaurant that served famous guests such as silent film star Clara Bow, passing through town. Abandoned after a fire, the hotel was partially restored in the early 2000s, only to see the developer run afoul of complex local regulations and abandon the project.

View of the Del Rio Hotel in Dolores (Montezuma County), Colorado. The three-story Chateau-style hotel has a stucco surface, a steep gabled roof, dormer windows, a corner entrance, and large windows on the first floor. Men stand on the sidewalk near scaffolding and construction equipment. A sign on a building next door reads: "Stroud's Cash Store, Groceries, Dry Goods, Meats." 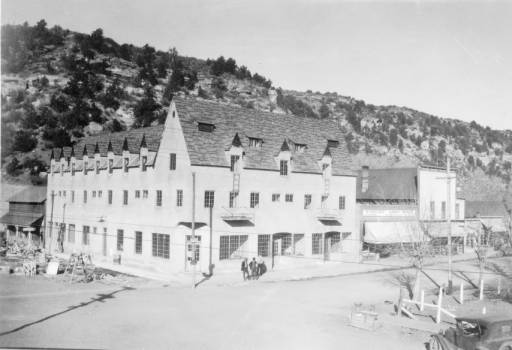