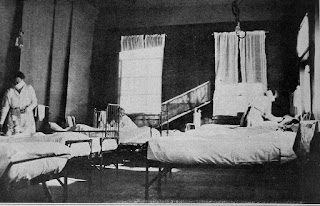 Origins may have been closer to home

A virulent strain of influenza, called the Spanish flu because it was incorrectly believed to have started in Spain, spread throughout the globe beginning in the spring of 1918.
Its origins may have been much closer to home.

By early October, it had resulted in shutdowns in Denver, mandated by progressive health officials, who closed the city for three weeks.

"The closing of Denver depends wholly of the spread of the disease," said Dr. (William H.) Sharpley. (Sharpley was the city's manager of health.) "It will be, naturally, absolutely necessary for the city to be closed while there is any danger. The main danger now menacing Denver is from outside towns and strangers arriving in the city from various sections of the country where the scourge is prevailing," according to Rocky Mountain News of Oct. 10, 1918.

Headlines in the Rocky, for that date read:

"There were approximately 500 cases in the city reported to Dr. Sharpley yesterday and he says that the death rate shows the disease is well in hand in Denver, but that in Denver and in towns thruout the state will be closed for the full three weeks, the run of the disease."

Scientists still cannot say for sure where the Spanish Flu originated, though theories point to France, China, Britain, or the United States, where the first known case was reported at Camp Funston in Fort Riley, Kansas, in March of 1918. Many American scientists believe infected soldiers spread the disease to other military camps across the country, then brought it overseas. In March 1918, 84,000 American soldiers headed across the Atlantic and were followed by 118,000 more the following month.

According to the History channel:
"The Spanish Flu did not originate in Spain, though news coverage of it did. During World War I, Spain was a neutral country with a free media that covered the outbreak from the start, first reporting on it in Madrid in late May of 1918. Meanwhile, Allied countries and the Central Powers had wartime censors who covered up news of the flu to keep morale high. Because Spanish news sources were the only ones reporting on the flu, many believed it originated there (the Spanish, meanwhile, believed the virus came from France and called it the “French Flu.)"

Just before breakfast on the morning of March 4, Private Albert Gitchell of the U.S. Army reported to the hospital at Fort Riley, Kansas, complaining of the cold-like symptoms of sore throat, fever and headache. By noon, over 100 of his fellow soldiers had reported similar symptoms, marking what are believed to be the first cases in the historic influenza pandemic of 1918, later known as Spanish flu. The flu would eventually kill 675,000 Americans and an estimated 20 million to 50 million people around the world, proving to be a far deadlier force than even the war those troops were sent to fight..

"Spanish Flu” was first reported in Colorado on September 21, 1918, among the Student Army Training Corp stationed at the University of Colorado in Boulder. Hundreds of soldiers were sickened and 19 later died, according to Katie Randolph, of the Denver Public Library On September 27, 1918, a young Denver University student named Blanche Kennedy, died of pneumonia a few days after returning from a trip to Chicago, according to University of Michigan Center for the History of Medicine. It was Denver’s first influenza-related death.

The initial outbreak of the disease, reported at Fort Riley in March, was followed by similar outbreaks in army camps and prisons in various regions of the country. The disease soon traveled to Europe with the American soldiers heading to aid the Allies on the battlefields of France. (In March 1918 alone, 84,000 American soldiers headed across the Atlantic; another 118,000 followed them the next month.) Once it arrived on a second continent, the flu showed no signs of abating: 31,000 cases were reported in June in Great Britain. The disease was soon dubbed the Spanish flu due to the shockingly high number of deaths in Spain (some 8 million, it was reported) after the initial outbreak there in May 1918. 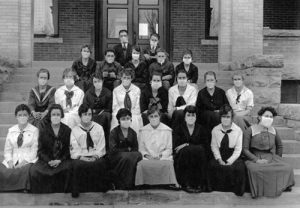 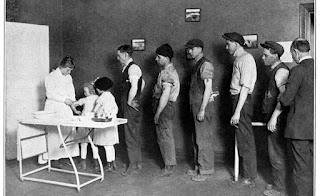 Photo Info:
1. Nurses and patients are treated in the makeshift hospital at the Sopris mining camp in 1918.
2. Canon City High School students wear masks during the 1918 pandemic. History Colorado.
3. Doctors at that time knew little about the prevention or cure for the virus.