Cannibal dwarfs, the dangerous curse, and a Left Hand legacy for Chief Niwot.

In Arapaho legend, the Hecesiiteihii, (sometimes Hantceciitehi, and possibly other spellings) are Cannibal Dwarfs, and dangerous man-eaters making them particular enemies of the Arapaho tribe. Their name is pronounced similar to heah-chass-ee-tay-hee (the first syllable rhymes with "yeah.").
Descriptions of the cannibal dwarfs vary but they are usually said to be the size of children, dark-skinned, and extremely aggressive. Some storytellers say that they had the power to turn themselves invisible, while others say they were hard to spot simply because they moved with incredible speed. Some suggest that the dwarfs' warlike temperament comes because they must be killed in battle to reach the dwarf after-world. Others believe that they were gluttons who habitually killed more than they could eat, just because they could. According to most versions of the story, the race of cannibal dwarfs were mostly destroyed in an ancient war with the Arapahos and other allied Native American tribes. 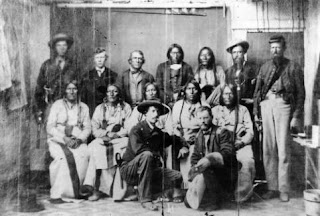 In the fall of 1858, just as the beginnings of the Colorado Gold Rush started to take shape, Arapaho leader Niwot (Left Hand) rode to meet the first white intruders at the confluence of Boulder and Sunshine Creek. Captain Thomas Aikins and fellow prospectors, riding in from Fort St.Vrain some 30 miles to the East, camped in Boulder Valley and planned to search for rumored-gold.

Niwot planned to ask them to leave, and warn them of the curse. The leader had learned English from his trapper brother-in-law John Poisal, (married to Niwot's sister,) and is said to have told them of the curse of the Boulder Valley.

"People seeing the beauty of this valley will want to stay, and their staying will be the undoing of the beauty."

As the conversation heightened, he proceeded to threaten them with a visitation by War Party if they did not leave.

The visitors were encamped at what the Arapaho considered to be a sacred site, Valmont Butte, some four miles to the north east of what is now central Boulder, Colorado. Niwot and his closest elder braves, Bear Head and Many Whips, had ridden out to the site where the new arrivals had decided to camp, near the place where Boulder Creek releases from the Front Range onto the Great Plains.

Some see the Curse as portentous of the settling of not only the Boulder Valley, but of the entire Western United States

According to the city of Longmont, Niwot had a lasting legacy:
"We have Left Hand Brewing Company, Left Hand Creek, Left Hand Greenway, and Left Hand Creek Park, and in Boulder County there is Left Hand Canyon. All of these references to ‘left hand’ refer back to the southern Arapaho tribal leader, Chief Niwot. Niwot means left-handed, so even the quaint town of Niwot, Colorado (7 miles west of downtown Longmont) and everything with the word Niwot in it (Niwot Mountain, Niwot Ridge) also means left hand."


Most recognize Niwot played an integral role in Colorado’s state history.
"He and his people lived along the Front Range, often spending winters in Boulder Valley. In the fall of 1858 during the Colorado Gold Rush, early prospectors were welcomed by Niwot and his people to the area, even though it was Arapaho territory. Chief Niwot was an intelligent man, not only urging his tribe to coexist peacefully with the white man, but also learning English, Cheyenne, and Sioux, which allowed him to communicate with white settlers and other tribes.

Peaceful relations between the southern Arapaho and the white prospectors, however, did not last."

Following the 1862 the Sioux Uprising in Minnesota and the Battle of Little Big Horn, against U.S. Army troops,  It was a tumultuous time in U.S. history between the white man and Native Americans across the Plains, and tensions ran high. Tribes raided wagon trains, and settlements along the Front Range.

When the Hungate family was murdered 25 miles southeast of Denver in June of 1864, Colorado Territorial Governor John Evans said he believed all Native tribes were responsible and decided to get rid of the “Indian problem.”

"He then ordered the peaceful southern Arapaho and Cheyenne tribes to relocate to Sand Creek, an area in southeast Colorado north of Fort Lyon, a United States Army fort at the time. Governor Evans then ordered the Third Colorado Cavalry, commanded by Colonel John Chivington, to patrol the land for hostile Indians," according to Longmont's site.

"Colonel Chivington and his men had patrolled Colorado’s eastern plains for months without finding any hostile tribes. Frustrated, they headed to Sand Creek. Despite Major Edward Wynkoop, commander of Fort Lyons, stating that the Native people at Sand Creek were peaceful, Chivington and his men attacked the Araphao camp the morning of Nov. 29, 1864.

There are no exact statistics on the number of people who were killed that day, but most historians believe approximately 180 people were killed during the Sand Creek Massacre, including Chief Niwot, and mostly women, children, and the elderly."

At the behest of men like Wynkoop and Captain Silas Soule, ( Who was in command of Company D, 1st Colorado Cavalry, which was present at Sand Creek on November 29, 1864,) the story of the massacre came out over time. Soule had refused an order to join the Sand Creek massacre.

President Abraham Lincoln, bogged down by the Civil War, called for a Congressional investigation into the tragedy. Congress ruled the “gross and wanton” incident a “massacre” rather than a “battle.” Chivington was reprimanded for his actions and lost his commission, Governor Evans was removed from office, and Colorado was placed under martial law. Soule, during the subsequent inquiry, testified against the massacre's commanding officer, John Chivington, and soon after, was murdered in Denver.

The Sand Creek Massacre site is now designated as a National Historic Site. 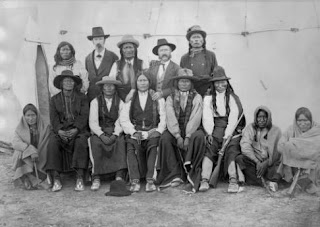 Source of identification: "Halfbreed : the remarkable true story of George Bent : caught between the worlds of the Indian and the White Man / David Fridtjof Halaas ; Andrew E. Masich (2004), photograph on page [6] of plates.

Chief Left Hand is my anxestral uncle. His sister, Snake Woman, is my 4th great grandmother.