“I must have a prodigious amount of mind; it takes me as much as a week, sometimes, to make it up!”
― Mark Twain 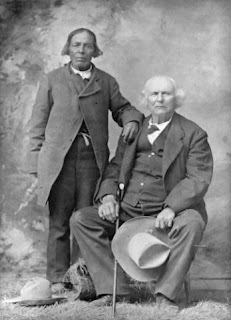 Miners and other pioneers have trouble deciding

Years ago, I remember Colorado Day as regular holiday.
In August 1, 1876, president Ulysses S. Grant signed a proclamation admitting Colorado as a state.
Colorado Day was celebrated occasionally ever since, giving us claim to "Centennial State" moniker, and was marked as a state holiday on August 1 for many years, and then moved to the first Monday in August,  right after the U.S. Congress passed the Uniform Holidays Bill in 1968.
In 1985, it lost status as a public holiday, becoming instead an observance, when the state started recognizing Martin Luther King Jr. Day as a public holiday.
That "come and gone" status of the holiday is perhaps emblematic of our changes of heart,  as a territory, or a state, or what have you.
We residents here have always had trouble deciding what we wanted, right from the beginning.
As early as November, 1858, folks that scrambled toward Pikes Peak looking for the gold reported in the guide books and eastern newspaper accounts, knew they wanted representation and other advantages to be gained from political controls recognized by the federal government. During the first fall in the diggings of what was to become Colorado, the relatively tiny population voted at Auraria to send a delegate to Washington D.C. to gain territorial status to the region.
"At the same time, with seemingly equal enthusiasm and, and if later memories were correct, with equal fraud on both the 'wet' versus 'dry' split in the population, the voters elected a  representative for the Kansas Territorial Legislature. From this shotgun method, one or the other might result in legitimate recognition," wrote the authors of "A Colorado History" by Carl Ubbelohde, Maxine Benson, and Duane A. Smith.
A bill was introduced at the national level for formation of the Pikes Peak Region into Colona Territory, but it died at birth in the House of Representatives in January of 1859. Two other territorial attempts were also unsuccessful in that winter.
In the spring of 1859, Pikes Peak area immigrants decided if Congress was not going to act, they would establish their own territorial or state government.
"In April, at a meeting in "Uncle Dick" Wooton's  store in Auraria, delegates representing Fountain City, Eldorado, El Paso, Arapahoe, Auraria and Denver City, determined that a state was needed, The preferred name was Jefferson," says writers of "A Colorado History."
A call went out for the development of a Constitutional Convention in June, but by that time, there were so many "go backs" (unsuccessful gold miners,) that they were undecided on whether statehood was the answer.
"Note the dashing boldness of these resolute pioneers. Here was a convention representing less than two thousand people, less than half of them fixed residents; before any great mines had opened, or even been discovered, before the capabilities of the soil were known; before an acre of land had been planted, and whilst every soul was in doubt whether or not there ever would be a basis for support of even a small population, taking measures without precedent, without authority of law, and without the slightest prospect of ratification, for the creation of an independent commonwealth."
Unable to decide, the convention put the decision off until August,  when they decided to straddle the ideas of statehood and territorial status by drafting both a state constitution and and a memorial to congress requesting territorial status. The two options were presented to folks living there, and 2,007 voted for territorial status, and 1,649 voted for statehood. Only about a fourth of those living there bothered to vote, however.
As time wore on, the government of Jefferson Territory became increasingly impotent. After the chaos of 1860 presidential election, things changed a bit. Kansas, was admitted as a state, and almost immediately afterward, Colorado Territory  bills passed in both houses at the federal level. By February 28,  of 1861, lame duck President James Buchanan signed the "birth certificate" for the Territory of Colorado.
The following 15 years was a similar wild ride, of flips and flops, on to statehood.