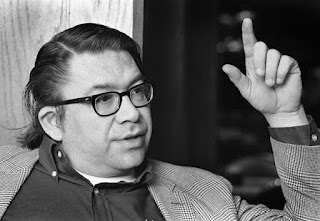 About 50 years ago — roughly about the time Americans were landing on the surface of the moon, and the Battle of Hamburger Hill raged in Vietnam — Vine Deloria, Jr.'s book "Custer Died For Your Sins" encouraged better use of federal funds aimed at helping Native Americans. It remains today, as one of the most significant non-fiction books written by a Native American.
It was shortly after Martin Luther King Jr. was gunned down on the balcony of the Loraine Motel in Memphis, even as the Civil Rights Act of 1968 was winding its way through congress. And President Johnson signed that legislation, exactly a week later.
"We often hear 'give it back to the Indians' when a gadget fails to work. It is a terrible thing for a people to realize that society has set aside all non-working gadgets for their exclusive use," Deloria wrote at the time.
Today, with chants calling to "send her back," it seems true that, like Black Elk (Hehaka Sapa) pointed out years earlier, "You have noticed that everything an Indian does is in a circle."
While noting that U.S. Presidents continually stressed the need to meet its treaty obligations with foreign powers, they have had over 400 treaties with Native American tribes and have yet to meet their obligations on any of them. Deloria saw the Vietnam war as just another example of the lack of integrity in the American government.
Deloria noted the similarities of the oppression of both Native Americans and African Americans, but also pointed out differences between the two. While oppression against African Americans typically excluded them from white society, oppression against Native Americans typically involved the forced inclusion into white society. He said he believed that this was due to the white desire to appropriate and exploit Native American lands and resources. He also noted that this is one of the reasons that Native Americans did not participate fully in civil rights efforts in the 1960s, believing that the liberals did not understand Native American nationalism.
“To the Indians it seemed that these Europeans hated everything in nature - the living forests and their birds and beasts, the grassy grades, the water, the soil, the air itself,” noted another influential writer at the time, Dee Brown, in "Bury My Heart at Wounded Knee: An Indian History of the American West."
"It is said that when Columbus landed," wrote Deloria. "One Indian turned to another, and said, 'There goes the neighborhood." A favorite cartoon in Indian Country at the time, depicted a flying saucer landing while an Indian watched. "Oh no, not again," read the caption.
The year of 1964 had seen the emergence of the Indian vote on a national scale. But their independence was also recognized.
"The current joke is that a survey was taken and only 15 percent of Indians thought the United States should get out of Vietnam," Deloria said. "Eighty-five percent thought they should get out of America. "