Power of the world works in circles

"Everything an Indian does is in a circle, and that is because the power of the world always works in circles, and everything tries to be round. In the old days when we were a strong and happy people, all our power came to us from the sacred hoop of the nation, and so long as the hoop was unbroken the people flourished ...  Everything the Power of the World does is done in a circle. The sky is round, and I have heard that the earth is round like a ball, and so are all the stars. The wind, in its greatest power whirls. Birds make their nest in circles, for theirs is the same religion as ours. The sun comes forth and goes down again in a circle. The moon does the same and both are round. Even the seasons form a great circle in their changing, and always come back again to where they were. The life of a man is a circle from childhood to childhood, and so it is in everything where power moves. Our tepees were round like the nests of birds, and these were always set in a circle, the nation's hoop."

___ Black Elk Speaks:
being the life story of a holy man of the Ogalala Sioux (1961),
as told to John Neihardt 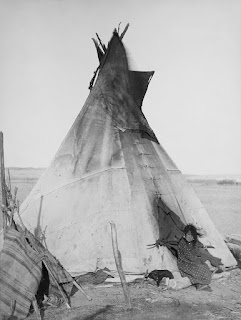 I was thinking of Black Elk's pronouncement regarding the truths of the world. I remember the Amarillo Hardware salesman had great catalog, with a rounded leather loop, that snaked around and became a handle for a foot-thick volumn that he used to carry into Taylor Hardware, about twice a month.
The catalog had pictures and particulars, of about 40,000 items of common hardware and was the quick way to access items for sale without ginning up the Micro Fiche. At the time (more that 40 years ago,) but it took some 'know how' to access those particulars.
As a result, over time hardware became a metaphor for me. For knowledge, for experience, for the chance to learn ... and more.
Sort of like Black Elk's circles. But, in danger of mixing my metaphors, hardware was a kind of circle.
When ever in my life I sought to bring meaning and purpose and understanding, I often went back to the hardware store of my youth for those items. My experience, the lessons learned, the act of gathering knowledge all returned there.
Like the big ol' rounded, leather-covered hardware catalog, with its rounded rope-like handles that looped around it and held it together — the hardware looped around me and held me together.
Of course, like Black Elk and the hardware store, various versions of circle theory have come to surface in other forms.
Joseph Campbell’s 17 Stages of the Monolyth story structure is too complicated for screenwriters, Dan Harmon (creator and writer behind Community and Rick and Morty) and his Circle Theory of Story is an easier option that you can apply to the development of your stories and characters.
Based on the best selling book Third Circle Theory, Pejman Ghadimi author and creator of the Third Circle system takes you into a step by step breakdown and explanation of the key points found in each circle. "Expect appearances and discussions with Third Circle Readers including experienced Entrepreneurs. This 5 hour HD course was in the making for over a full 6 months in the hopes of helping more people discover how powerful being purposeful can be. It is a visual supplement to one of the most ground breaking modern concepts of Entrepreneurship."
But those, to me, seem too complicated for the truths that Black Elk spoke of.
It is probably closer to the ideas that J. K Rowling noted in "Harry Potter and the Deathly Hallows"
“Which came first, the phoenix or the flame?'
'Hmm . . . What do you think, Harry?' said Luna, looking thoughtful.
'What? Isn’t there just a password?'
'Oh no, you’ve got to answer a question,' said Luna.
'What if you get it wrong?'
'Well, you have to wait for somebody who gets it right,' said Luna. 'That way you learn, you see?'
'Yeah . . . Trouble is, we can’t really afford to wait for anyone else, Luna.'
'No, I see what you mean,' said Luna seriously. 'Well then, I think the answer is that a circle has no beginning.'
'Well reasoned,' said the voice, and the door swung open.”
A real circle is simple, easy to understand, with rounded-off edges and smooth traveling. Comfortable, familiar, solid. Like hardware.
Posted by ___ Restless Native at 10:14 AM