"Lady of Death" visits, but tells no tales 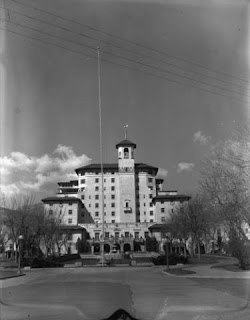 Of the 10 most famous myths and legends of Irish folklore, the fairies reside on the top shelf.
"It is said that they live in “cnocs” (hollow hills, in Irish), which are located in the “sidhe”. The “sidhe” are mounds where megalithic monuments are erected in many places on the island.
One of the most famous legends about fairies is that referring to the “Lady of Death,” a fairy that appears during the night with hair loose and red eyes. According to the lore, it is said that she arrives at the home of a family to mourn for several days the death that will fall on one of its members, says Ireland Before You Die (IB4UD).

Photo Info:
View of the Broadmoor, Colorado Springs, El Paso County, Colorado, shows a nine-story Italianate structure by architects Warren and Wetmore, with hipped terra-cotta roofs, friezes, a cupola with weather vane, and an arcaded entry. The Italian fountain (installed 1923, same year as the Lady of Death visits Elsie Jogenson Suttle,) in the foreground is surrounded by lawn, balustrades, trees, and paved drives.

Very sad story about Elsie. Hard to believe that no one so close by saw or heard anything. And what about the threatening letters? Hadn't she shared them with anyone or the police? Very odd indeed.