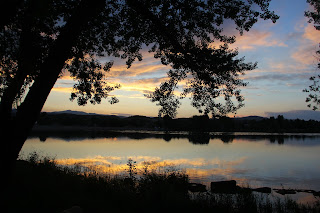 'St. Louis' Flour, the promise of a rails,  and 'Maggie Murphy Potato' all played a role

Fake news and false advertising was not invented yesterday.
Locally, I can at least provide several examples from more than 100 years ago.

St. Louis Flour
Before there was Loveland, much of the wheat grown in the Big Thompson River valley went through Andrew Douty's mill. Originally near Boulder, Douty moved the flour-grinding operation to an area just south of what is now Loveland proper, in 1867, and a small settlement appeared.
"The settlement was given the name of St. Louis when Douty began printing the words"St. Louis Flour" on the sides of the his flour bags, as a marketing ploy to increase sales of his product in the mining districts," wrote Jeff and Cindy Fencis in "Exploring Loveland's Hidden Past."
St. Louis thrived, and in 1868, it was even on the ballot, being considered as the county seat, losing the election to Camp Collins.
"Competing directly with Namaqua for economic development, the town boasted a blacksmith shop operated by Duncan Watt, a general store owned by the Smith Brothers, and a meat market operated by Frank Bartholf and C.C. Bushnell," just for starters.
It later supported a Doctor, and a deputy sheriff (Perry McClanahan, who arrived in 1871, served in both roles.) The first public school system in Larimer County was established in St. Louis and several churches worshiped in the schoolhouse.
Douty's mill continued to operate, under various ownerships and the St. Louis Flour name, at least into the mid-1880s, when steam-driven power appeared in Loveland.
"At an unknown date, the original mill building was moved to a farm on Madison avenue near the Great Western Sugar factory, where it was used as a barn until it burned to the ground in a fire in 1969.
The little berg owed much of its early success, of course, to the false suggestion that flour from the valley originated in another St. Louis.

Great Potato Hoax of 1895
On the masthead, the Loveland Reporter made the claim before the turn of the last century, to be "The only strictly truthful paper in Colorado."
"Yet in 1895, it pulled one of the biggest hoaxes in Colorado history," notes Zethyl Gates and Ann Hilfinger in their book, "Historical Images from the Loveland Museum/Gallery Collections."
The story revolved around  a mammoth potato supposedly grown by a local farmer.
"One of the most successful potato growers was Joseph B. Swan, who farmed Southeast of Loveland. During one year, he reportedly harvested 25,816 pounds, or 430 bushels, from one acre of land.  "Several prominent citizens citizens attested to this after measuring the acre themselves and witnessing the harvesting of the crop. The Reporter, of course, had chronicled that listed 72 different varieties of spuds grown by Swan.
"In 1895 it appeared that Mr. Swan had outdone himself by raising a potato that measured twenty-eight-inches long and fourteen inches across, and weighed eighty-six pounds and ten ounces. The editor of the Loveland Reporter, Mr. W.L. Thorndyke, convinced Swan to have his photo taken holding the giant potato."
The story, in the mechanics of the time, went viral. "Soon letters from all over the world —Austria, Russia, France, Libya, Denmark, Denmark, Germany — everyone asking for seed or pieces of the potato for propagation." For months Thorndyke's paper carried letters received.
"He replied to many of them, suggesting that readers send twenty-five cents for a photo of the famed potato, which by now had been named. "The Maggie Murphy Potato" story continued to be followed including a later story appearing on the front of the paper saying that thieves had broken into the store and "made off with it." The farmer, through the paper, offered a reward of $100 for its return.
Eventually the truth about the magnificent potato was brought to the surface. "'Thorn' admitted he put Mr. Swan up to making the large potato out of wood and having the photos taken. The editor commented on the revelation. "Newspapermen are reported to be the greatest liars on earth."

Build it, and hopefully they will come
The town of  St. Louis in Larimer County, mentioned earlier, continued to grow, little by little, and the promise of the Colorado Central railroad would extend lines from Longmont north to Fort Collins, with the obvious path being through St. Louis, accelerated that a bit. In 1877, the Big Thompson Hotel was built by Mrs. Harriet Sullivan.
"As expected, the Colorado Central located rail lines though the Big Thompson Valley in late 1877. Unfortunately, the rail lines were routed approximately one mile west of St. Louis, completely bypassing the community," wrote the Fencis in their 2007 book.
"The town of Loveland was quickly established along the rail lines, leading to the immediate demise of St. Louis. Out of economic necessity, most of the business establishments were either closed or relocated to Loveland."