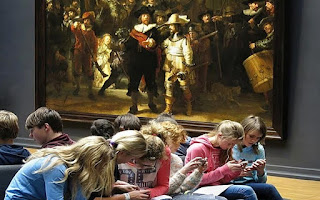 Election night, I was with a group of people, with skin in the game in a local elections, as they waited for results. Big screens surrounded the group overhead but about 70 percent of the heads were down everywhere, watching the feed on their phone. Several of them even commented on how bad they thought that was, considering how hard they tried to get their teen-age kids to look up from the phones, on a daily basis.

“It seems every generation of parents has a collective freak-out when it comes to kids and new technologies; television and video games each inspired widespread hand-wringing among grownups. But the inescapability of today’s mobile devices — combined with allure of social media — seems to separate smartphones from older screen-based media. Parents, teenagers and researchers agree that smartphones are having a profound impact on the way adolescents today communicate with one another and spend their free time,” notes Time magazine in a Nov. 6 story.

“And while some experts say it is too soon to ring alarm bells about smart phones, others argue that we understand enough about young people’s emotional and developmental vulnerabilities to recommend restricting kids’ escalating phone habits.”

According to Time, the latest statistics on teenage mental health reinforce the concern.

“Between 2010 and 2016, the number of adolescents who experienced at least one major depressive episode leaped by 60%,” citing a nationwide survey conducted by the Department of Health and Human Services.

“The 2016 HHS survey of 17,000 kids found that about 13% of them had at least one major depressive episode per year, compared with 8% of the kids surveyed in 2010. Suicide deaths among people ages 10 to 19 have also risen sharply; among teenage girls, suicide has reached 40-year highs, according to the Centers for Disease Control and Prevention. All this follows a period during the late 1990s and early 2000s when rates of adolescent depression and suicide mostly held steady or declined.”

I personally have always tried to treat technology like an unfamiliar dog, that might easily become a new friend, but always carries with it the potential to bite you and others around you if not approached correctly.

And it appears local educators have a similar approach.

Lewis Palmer District 38 Superintendent Karen Brofft, and the Parent Community Technology Advisory Committee earlier this week presented SCREENAGERS: Growing Up in the Digital Age, a documentary about one of the biggest parenting issues of our time.

“Are you watching kids scroll through life, with their rapid-fire thumbs and a six-second attention span? Physician and award-winning documentary filmmaker Delaney Ruston saw that happening with her own kids and began a quest to uncover how it might impact their development. Ruston takes a deeply personal approach as she probes into the vulnerable corners of family life, including her own, to explore struggles over social media, video games, academics and internet addiction,” said a release about the Nov. 13 presentation.

A recent article by Louisville, Ky., writer and teacher Paul Barnwell in The Atlantic explores the issue.

“The phone could be a great equalizer, in terms of giving children from all sorts of socioeconomic backgrounds the same device, with the same advantages. But using phones for learning requires students to synthesize information and stay focused on a lesson or a discussion. For students with low literacy skills and the frequent urge to multitask on social media or entertainment, incorporating purposeful smartphone use into classroom activity can be especially challenging. The potential advantage of the tool often goes to waste,” he says

“It’s like giving kids equal access to cigarettes and candy ... teens are not as adept at understanding risk and cause and effect,” he says.

“And I know smartphones do have wonderful learning potential, having had occasional success with them in my own classroom. I’ve had students engage in peer-editing using cloud-based word processing on their phones, for example. I’ve also heard and read about other educators using phones for exciting applications: connecting students to content experts via social media, recording practice presentations, and creating ‘how-to’ videos for science experiments.

We also know that other school districts across the country are in the midst of trying to incorporate technology to enhance learning, and to close the so-called digital divide—to ensure all students have access to an Internet-enabled device. One way to solve the access issue is to allow students to use smartphones in class,” Barnwell says.

I suppose it is appropriate that we consider smartphones and other technology like renowned science fiction writer Arthur C. Clark. “Before you become too entranced with gorgeous gadgets and mesmerizing video displays, let me remind you that information is not knowledge, knowledge is not wisdom, and wisdom is not foresight. Each grows out of the other, and we need them all.” Or like another such writer, Aldous Huxley said. “Technological progress has merely provided us with more efficient means for going backwards.”
Posted by ___ Restless Native at 2:27 PM